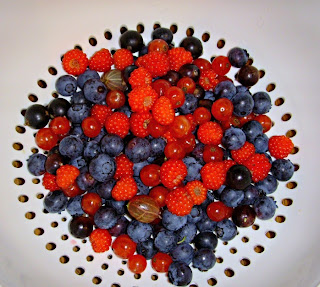 The back yard garden is moving along.  We've had rain every stinking day for the last two weeks, and every time the sun dares to show its face, all the plants grow about 3".  In one day.  Double that if the plant happens to be a weed.

Aside from being concerned that my potatoes are rotting underground before they're fully formed, and wanting to know what furry creature is sleeping in my soon-to-be-dug garlic bed, I'm happy with the way things are looking out there.

The tomatoes are coming along nicely, the miniature plum tomatoes (Juliet variety, if you're curious) are turning red already and it's only July 2nd!  One of the cherry tomatoes (variety unknown because it's a weed tomato that I potted up) is also turning, but these are more of a brown-red.  Definitely not something I've ever planted, so a big "thank you" to the birds for their assistance.

The biggest hit right now is the berries.  There are 4 blueberry bushes in the middle of the yard.  The bushes are about 6 and 3 years old, and are really starting to produce heavily at this point.  I go out each day with a small bowl and just pick enough for us to eat after dinner each night, but they're beginning to get ahead of me now. 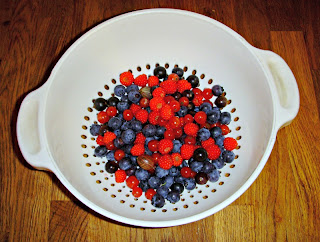 Today I reached into the berry patch for the first time, and have the scratches up my arms to prove it.  Two years ago I dug out an over-ambitious raspberry (and replanted it in a nearby empty lot).  I replaced it with red and black currants and a gooseberry, all supposedly thornless.

Well, they're all fruiting right now, but you know what's fruiting the most heavily?  The raspberry.  Which came back of its own accord, or never really left, though I saw no sign of it last year.

So this is what just came out of the yard this afternoon.  Instead of snack berries, I'm feeling the need to make some kind of mixed berry tart.
Posted by Karen at 3:31 PM

Looks so awesome! There are wild berries all around my yard, but the raccoons eat them before they get ripe enough for me.