A funny thing happened on the way to the craft show

This is a momentous event, because I haven't done that for quite some time.

It isn't a complicated dress, but it still sat on my workroom table unfinished for the better part of two weeks.

It isn't a complicated dress, but I liked the pattern so much I made it in a Liberty cotton that I've had sitting for several summers.  It's cool and airy and I love it.

The pattern is Simplicity 1609, and I noticed it a while back on Gertie's blog.  I'm glad I read her review of it, because this dress does not have the Big 4's usual excessive ease.  I'm usually a 12 in Simplicity, etc., but I went by my measurements this time and I'm a 14.  I know it looks a big spacious on the dress form, but that's because Evelyn's back isn't as wide and she's somehow not gained an inch or so in the chest where I have.  We won't even discuss her refusal to adjust her waist measurement to mine. 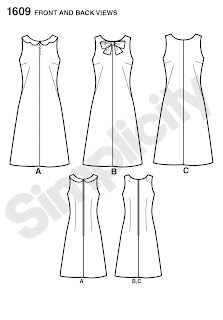 I skipped one step in the pattern -- deliberately because of insufficient fabric, and because I didn't think it would make that much of a difference.  There's a center front seam on this dress, and instead I cut it on the fold, leaving off the excess which would have been the seam allowance.  There didn't seem to be that much shaping to the front seam, and I didn't have quite enough fabric to cut separate pieces.  Next time I'll follow the instructions, because having that seam really would give me the ability to tweak the fit a bit more, but since I wanted this version to be looser and less fitted, it worked fine.

The darts on this pattern really make a difference in the fit.  Even though I like shift dresses, they tend not to be the most fitted things in my wardrobe.  (Yes, Simplicity is calling this an A-line dress, but we can agree to disagree, can't we?  It feels more like a shift when I'm wearing it.)  This has two darts in the front and one in the back.  And if I'd kept that center front seam, who knows what greatness I would have achieved?

Anyway, quick, fast, cute summer dress - two pattern pieces, facing pieces, invisible zipper.  It shouldn't have taken me any time at all, but I kept getting distracted between steps.  If you need some cute instant gratification, I'd recommend this dress.  But be warned, there's not much excess in this pattern, so if you're not going to make a muslin, go up a size if you have to and work your way back down.  With that many darts and a center seam, you can fix anything - just cut the facing last, after you've stabilized what your size is!

This is cute and I love that you've used a Liberty print for it. Perfect for the summer we're having!!!

After seeing your version, I am re-thinking this pattern. I do love your version. Thanks for a great post!

Beautiful! Yay for sewing for yourself!

Adorable dress! And it was great seeing you today.

Oh what a lovely dress! I think I've bought that pattern. I really need to spend more time with the machines. How are you doing? How is semi-retired and working for yourself going? g

This is such a great dress! I'd never noticed that pattern either but now I kind of want it. I can't wear shapeless shifts, but with all those darts maybe this would be "airy" rather than "tenty." Gorgeous fabric!