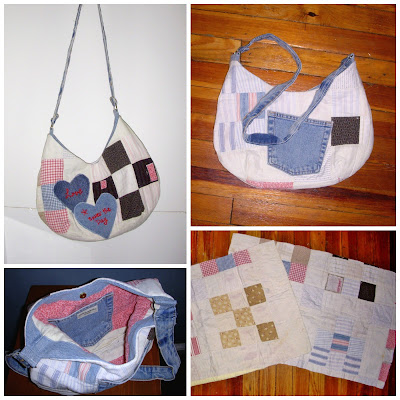 When I first started my handmade Etsy shop, several sewing friends, Elizabeth among them, reminded me that I'd always said I'd never want to sew for a living because it would take all the pleasure out of it for me.

I stood reminded, and said that I remembered saying that, but I was going about this by not sewing the kinds of things that I enjoyed sewing for myself -- there would be no women's clothing in the shop, for example, and the bulk of it would be things I wouldn't have a use for and therefore wouldn't want to keep.

Except I've made several pieces of women's clothing for the shop now, and even sold one.  And I liked all of them.

And, worse yet, the other day I made something I'd really like to keep.  It's kind of strange, because it's totally not my normal style, but I really like it.  I also know that someone else will, which is why it's been listed anyway; it's not like I don't have enough bags of my own (made by me, for the most part), and I think this definitely has Etsy appeal.

I'm just trying to figure out why it appeals to me so strongly.  I think there's a weird subconscious thing going on with this one -- I knew when I found the quilt pieces I wanted to make a bag from them, but I thought it would be kind of kitschy/weird.  Then the other night, the bar at the corner was hopping and there were drunken couples fighting in the street under my window and the police weren't responding to noise complaints, so I got up and went into the workroom from midnight until nearly 3 a.m.  (Don't worry, no actual sewing occurred, other than some hand stitching.  I was tired and pissed off, but not stupid enough to rev up the machine at 2 a.m.)

By the end, I was so sleepy that I couldn't think straight.  I'd cut out the quilt bag,  complete with lining, strap, embellishments, pulled together the rings I wanted to use, and embroidered the denim appliques.

I also cut apart four old bags that haven't sold for two Christmases running, found zippers for them and recut them into new shapes and did all the pinning.

I found my idea notebook and drew out 4-5 sketches and a bunch of notes.  I went on the computer and drafted the Etsy listings for all my uncompleted work for the night.

When I fell into bed at 3 a.m., I was exhausted but happy, and when I got up the next day, it almost felt like the elves had been in the workroom but I literally couldn't remember doing half the work.  I even went on the computer later in the afternoon and drafted the Etsy listings for all the work I'd done the night before, and then realized that I'd done that already and completely forgotten.  I'd even used most of the same words in my descriptions, so apparently some part of my mind was functioning.

Just not a part I'm very familiar with.  Maybe I should try this sleep deprivation thing more often.  It's very productive, in a hallucinatory kind of way.

It is good to be productive when life if throwing you lemons! Perhaps I should try that at 4am when my hormones are keeping me awake. How is the change in career working out? I often think of walking away from the professional life...

Hey, you love what you do and you'll do it at all hours. Congrats to you on finding what works!

Very nice. I love hearing about your days of productivity. You have been keeping it going. I'm very proud of you. =)