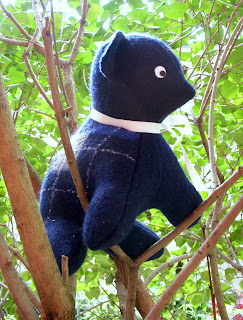 So I have a few new members to my Knit Critter family. These little guys, who I'm calling Adventure Puppies for no better reason than they look pretty adventurous up there in my lilac tree, are made from a felted navy blue argyle sweater.

It started out life, according to the tag, as an XL.  By the time someone had put it in the dryer and forgotten it, it might have fit an XL child.  This was not the intended wearer.

So it ended up with me, and I took a feel of the lovely texture of the wool and I cut it to pieces.

The pattern is the same as what I used for the gray Knit Critters, just slightly different ears this time -- and I gave them each a tail, since I remembered it while the butt seam was still open. 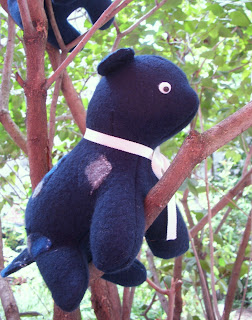 Using found clothing is always a challenge.  You'll note that one puppy is fully argyle on his back and head, while the other merely has argyle "cow spots" and a tail.  That would be because the sweater was only argyle on the front.  I debated making them identical, each with an argyle side and a spotted side, but that didn't work for me.  There'll be someone who likes each of these little guys as they are.

I didn't bother with noses this time around; I thought that red would just be a little too much with the blue and ivory, and I don't tend to have a lot of felt around the house.  I think these guys work fine with just their ironed-on felt eyes and an ivory grosgrain neck ribbon.

In addition to puppies, there are now . . .  elephants.  Coming soon. 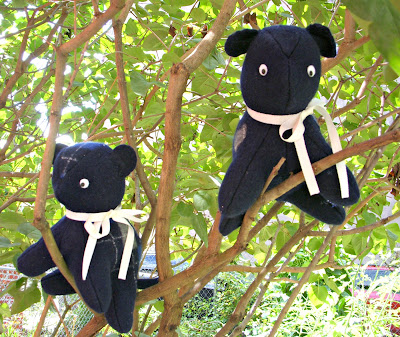