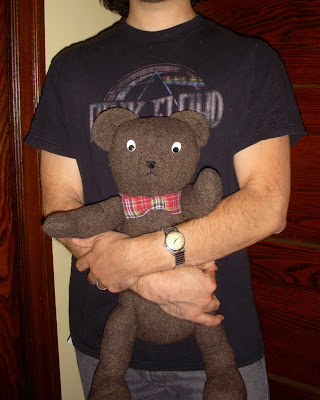 I have a good and patient husband.

When I first started making bears, my prototype was much larger -- about 20" tall.  I liked it, but I thought it was too large to sell well, it would dwarf small children and, at the time, I couldn't get its arms and legs threaded with the long darning needle I was using.  So I stitched its arms and legs on and used him as a display piece at craft shows.

We went to Walmart recently because I needed more poly fiberfill, and while I generally avoid Walmart for all the usual reasons, I can't argue with a 10 lb. box of fiberfill for their kind of price -- about what 4 lbs. would cost at Joann's. Plus it's made in the USA, which means I can feel vaguely better about it.

On the way out of the store, we passed through the craft section, and my eye was caught by a pack of needles.  "Doll needles" they were called, and the longest one was at least 1.5" longer than my darner.  Not only that, but the eye was big enough to thread with the hemp cord I had sitting at home in a big ball.  Double plus.

This past weekend, the bear got taken apart and strung up properly.  He's much happier.  Originally he had black button eyes, but I recently found these googly eyes with button shanks, so Mr. Bear got an upgrade all around.  He's now listed in the shop.

And my husband made the mistake of picking him up to move him this morning, and I saw the combination of teddy bear, Pink Floyd t-shirt and obviously male forearms and ran for the camera.

He's a good and patient man.  I think I should make him a shirt for this.
Posted by Karen at 3:09 PM