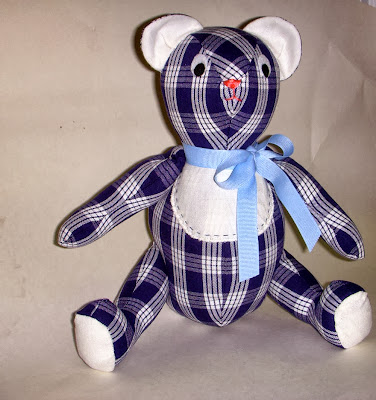 Palaka Bear is complete, and on his way to his new home.

Despite his somewhat frightening beginnings, I think he turned out well.  My friend, who purchased him for her boyfriend's soon-to-arrive first grandchild, said that he really wanted the plaid to be a feature of the bear, and it certainly is.

I actually made 2 sets of arms - these were the first, and I thought the in-and-out where the plaid meets and separates was a little dizzying.  Then I tried it on the bias and that was far worse.

Now I'm somewhere between resigned and happy about the arms and legs, and considering what a chore it usually is, I'm thrilled about the plaid matching.

The fabric for the next set of bears arrived the other day - and it's the polar opposite of this.

Would love it if I could have such a treasure bear.