If I say so myself The shirt looks almost as good as the man wearing it.

I'm allowed to be a little smug, right?

Smugness aside, I'm really happy with how Mario's latest shirt turned out.  It's been a while since I made one, as was evidenced by my spectacular cutting screwup.  I somehow managed to cut the fronts matching at the fold line instead of the center front itself.  That half-inch or so is just enough to really throw it off, and this print is trippy enough without having the pattern not match.

Thankfully the fronts were the first pieces I cut, and I could simply cut the cuffs and collar pieces from the bad left front and cut a new one that matched.

To make up for the earlier drama, the shirt went together like a dream.  It was probably the easiest collar I've ever done, the cuffs and sleeve plackets gave me no argument at all, and my narrow hem foot didn't eat any fabric.  I used Fashion Sewing Supply's Pro-Woven Super Crisp interfacing so he could have his collar and cuffs as stiff as he wanted them.  (Personally I would have gone a little softer, with this print, but he was a man with a plan). 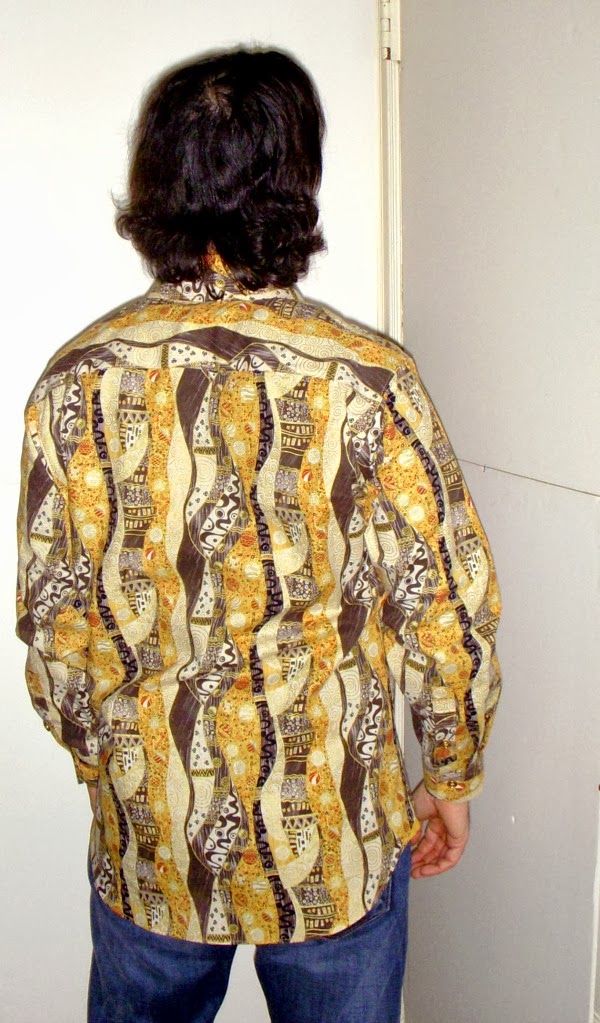 I did the inside collar band, the undersides of the cuffs and the underside of the sleeve placket in solid gold-colored shirting, and Mario's insistence on gold shirt buttons -- gold metal, mind you, not plastic -- sent us on safari down to 4th Street.  Pennsylvania Fabric Outlet came through, as always, with exactly what he had in mind.

It's not what I would have chosen, but in the end they really did work.

And he's happy.  He got exactly the shirt that he wanted, so I call that a win.

While we were in the store buying the buttons, however, he came over with another bolt of fabric in his arms.  "What do you think," he said, "of this one for a short-sleeved summer shirt?"

Who am I to argue?  And apparently shirt-making is good for me after all the production sewing I've been doing recently.  It's good to have to slow down and think about what I'm making, use a few more pins than usual and take my time.  Short-sleeved shirts only having collars to fight with, not cuffs and sleeve plackets, I could probably knock it out relatively quickly.

He wouldn't buy the fabric that day, not understanding the basic logic of "buy it, because it won't be there next time," but I'm going back down to 4th Street next week to meet with someone about a custom teddy bear order, so if it's still there, I'll pick up a few yards.  I may leave the choice of button up to him, since he seems to have developed opinions about these things.
Posted by Karen at 8:30 PM

Very nice shirt. Haven't been to Fabric Row in years! Are there many fashion fabric stores left?????

I loved this fabric when you purchased it but I love it even more sewn up! Looks fantastic and looks fantastic on him. Good collaboration of two creative minds.

I love seeing his vision made up into the shirt. Tell him his next step is to sew them himself (that's what my husband does because the man is obsessed with one way plaids and also has long arms -- he can fiddle with the plaids :) )

Love the shirt! Great job! I like reading about all that you do--please include how you are doing with your production sewing.