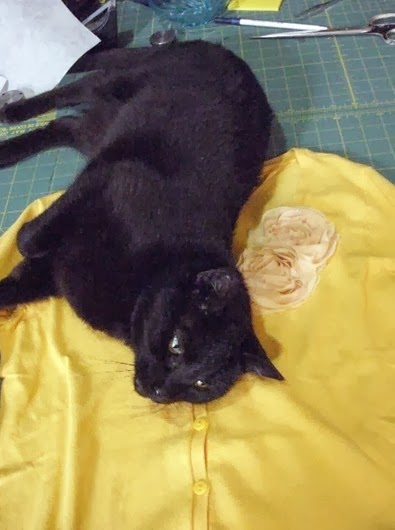 Lily, my chief sewing assistant and best feline friend, is under the weather, so not a lot of sewing is happening at the moment as I turn into uber-mommy, following her around and getting on her nerves.

We got home yesterday at dinner time, and Lily had spent the day sleeping in my husband's third-floor office.  She came out, and the first thing I noticed was her in the litterbox.  Lil's privagte; I rarely see that happen.  I noticed that she was there for a while, and it didn't look like she'd done much.  She then went immediately downstairs and tried the first floor box, with the same result.  When she attempted to use the rug by the back door, I realized something was up, and we popped her into a carrier and took her to the University of Penn's vet hospital, which is only about a mile away and has a 24 hour emergency room.

And, unusual for an animal emergency in my house, it wasn't midnight, or a holiday.  It was, however, snowing.

Four hours later, we were back home.  The vet had diagnosed what I assumed, a urinary tract infection, and sent her home with a bottle of liquid antibiotics for me to squirt down her throat.  I gave her the first dose when we came in at 10:00 p.m., and shut her in the guest bathroom so I could monitor her comings and goings (or not goings).  At bedtime, there were a few little spots in the box, so no change, but this morning, there was a nice sized hardened puddle, and later, after her second dose, I watched her go, and things look normal already.

For a fifteen year old girl, she responds really well to treatment.  I also think we got lucky being able to get her to the vet so fast - our vet would have undoubtedly seen her today, but that would have been a long night of discomfort for her, and at her age, she could also deteriorate far more quickly.

This morning I let her from the guest bathroom into my husband's office (which is attached to it) and we just woke up from a nice long afternoon nap on the bed together.

When Lily feels better, I feel better.
Posted by Karen at 11:26 AM