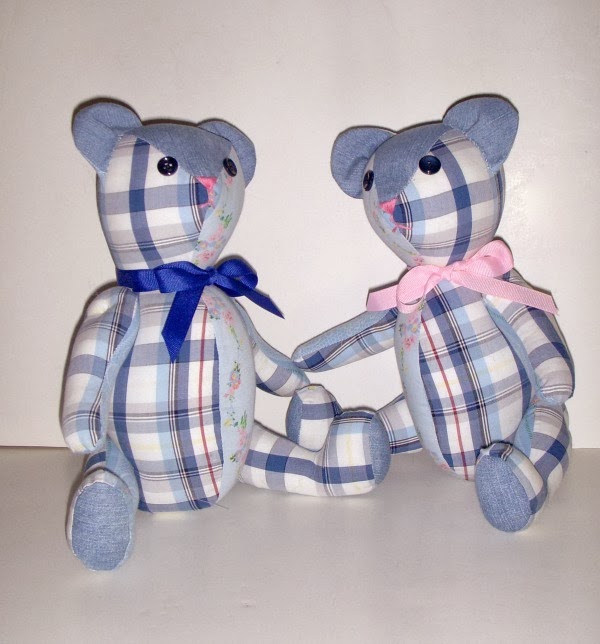 Back in October, I did a show in South Philadelphia.  While I was there, I was approached by a woman who was interested in custom teddy bears.  She couldn't stay and talk that day, but she took a card and said she would call me.  I never heard anything, so I figured she either lost interest or lost my card.

In early December, she called me and wanted to know if she got me the fabrics ASAP, if she could have 3-4 bears by Christmas.  I said at that point I had about a 10 day turnaround time, so it would be okay.  We traded emails and phone calls for two weeks, at which point it got too close and she said she'd follow up after the holidays. 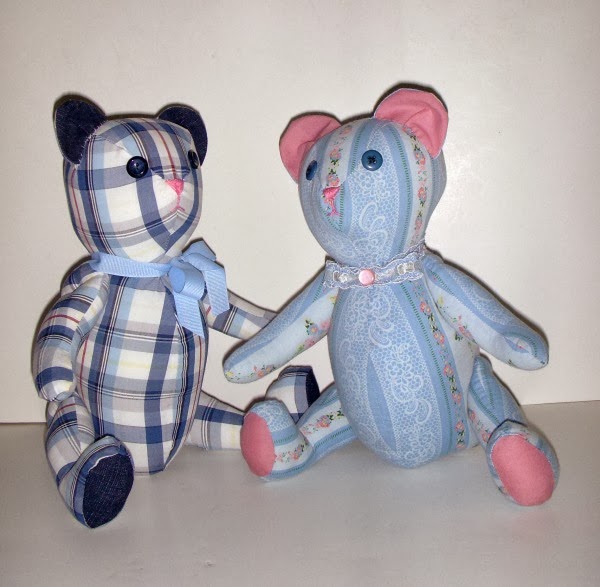 They finally arrived, and the first thing I noticed when I opened the box was the handful of dryer sheets on top.  I'm not a fan of dryer sheets or their scent, so I chucked them, got on with my day and didn't take the clothes out of the box until later.  Then I was really sorry I hadn't pulled them earlier, because I'd been doing laundry and the reason for the customer's dryer sheets was to try to kill the cigarette smell in the clothes (despite her delays, she hadn't found time to put them in the wash).  My workroom immediately filled with the smell of Newports.

The two pieces were a woman's housedress in a blue wallpaper stripe with lace and a man's plaid shirt.  I was asked to do a single bear in each fabric, and the two remaining bears using both fabrics.  The fabrics are both blue, but that's about all they have in common.  I puzzled for a while about how to make it work, and decided to incorporate a bit of a third fabric (light blue denim) to offset the two and make them argue a little less.  I think it works, at least as well as it's going to. 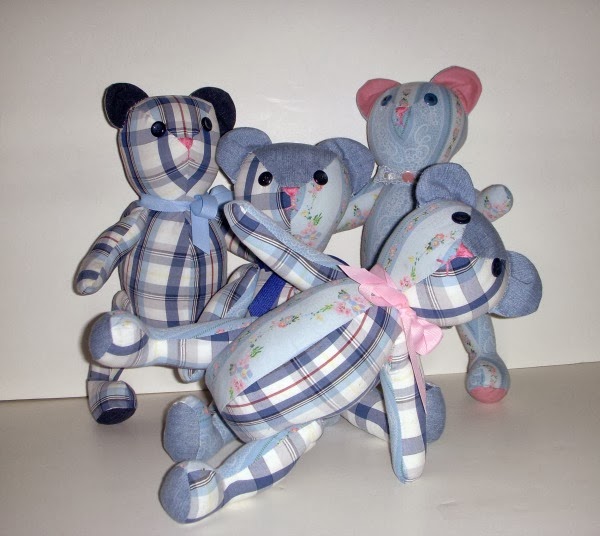 And if you ever need to know how to get the smell of cigarettes out of fabric when you also don't have time to wash it (I'd done 3 loads of laundry on the day the fabric arrived; if only I'd known earlier), soak it with Febreze and hit it with a really hot iron.  That'll do the trick.

Of course, when I walk into the workroom, I still think I smell the ghost of a chain-smoking woman in a blue housedress.  If I didn't know better, I'd think it was my mom.
Posted by Karen at 10:41 PM

Well in spite of the sagas they are gorgeous bears! I think the denim does tie them together well. Although the fabrics are totally different they don't actually clash. A nice touch of mum and dad!

They are super cute.

Karen, these are wonderful! Thanks for the febreze tip!

The bears are really sweet! I think you made it work very well.

Adorable bears. Great job. Smoke odor - awful, isn't it? I get boxes of hand knit or crocheted items for the babies in the NICU at Cooper in Camden and many reek of cigarette smoke. I spray everything with Febreze and put it all in a bag and close the bag tight for a few days. I have heard that laundering with vinegar can cut the odor but I would not want to send things with a vinegar odor to the NICU either. I will say that dryer sheets work very well in musty books. Tuck a few every so many pages and close up in a ziplock plastic bag for however long it takes to get rid of the musty smell.