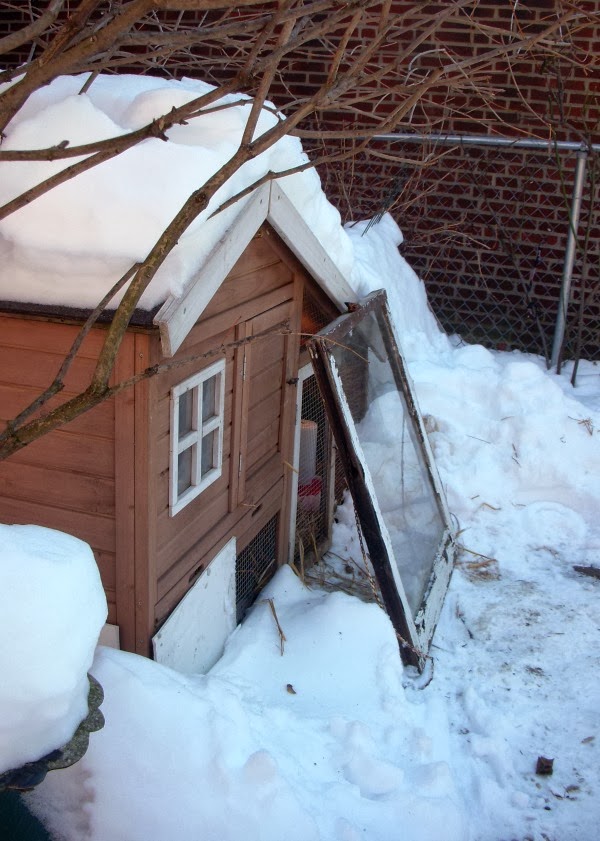 For the second time this winter, Bonnie the hen is on egg strike.

She moulted late this year, didn't start laying again until the end of November, and her production has been really uneven.  She's no spring chicken -- I'm thinking she's pushing 4 now -- but still, she's been regular up until this whole Polar Vortex thing.

A few weeks ago, when we had days that actually pushed into the high 40s (tropical weather, practically), she revved up and laid every day for four days and she's not a daily layer.  I guess they were all backed up.

Chickens use a lot of energy to produce eggs, and they also use a lot to keep warm.  No matter how much protein and how many calories I give her during the really cold weather, she's not going to waste them on food for me.

What you see here is her coop during the earlier Vortex-with-snowstorm.  I didn't wrap her up as much this year, out of procrastination and also to see how well she fared.  Turns it it is way easier to keep a chicken alive in the winter.  Her insulation includes foam core boards slid along two sides of the coop to keep the show out (which get removed for air flow when the snow is solid and not likely to blow in), a heavy duty plastic sheet over the extension at the far end by the fence, so she still gets sunlight but less wind, and an old storm window in front of the door/water area to keep the breeze down while she's feeding.  There's a light over the waterer that I keep on a timer, though I've been leaving it on all day during the worst cold, mainly to keep the water thawed.

If it's really bitter, I'll put a warmer in the roost area at night.  We used to have a stray cat who lived on our porch, and my housemate found these microwaveable things she used for his bed.  They're hot pink, frisbee-shaped, and maintain their heat for about 6 hours.  It's not going to keep her from freezing to death if that's going to happen, but it does keep it more comfortable up there while she's sleeping.
Posted by Karen at 12:13 PM

It's so nice to read a chicken story again :) I missed those posts.

Ditto to 'kittiesx3'. I was thinking about Bonnie last week. She seems to be a tough ole bird!!!! Thank you for the update. renita