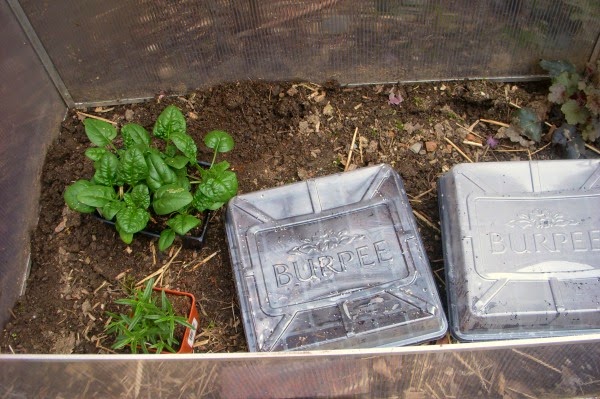 Can we all agree that Mother Nature has lost her mind?

I've started -- and stopped -- working on the garden so many times in the last few weeks I think that it doesn't believe I'm going to do anything this year.

Thankfully, yesterday and today proved the garden wrong, as it's now all cleaned up, half the potatoes are planted, all my seeds are finally out in their little greenhouses (inside the cold frame; I don't completely trust Ma yet not to freeze them), and I've pulled out everything that didn't survive the winter, which included an 8 year old rosemary, all my lavender, and two rose bushes.

I'm mostly sorry about the lavender, but in a small garden, sacrifices have to be made.  I'll never be able to wedge in anything new if things don't leave occasionally.  This is giving me the opportunity to do a lot of rearranging, which is something I love.  My poor yard, which is only 20x20 (large for a city row home, but laughable by most garden standards), has been a weed lot when I bought it, a war zone when I tackled the running bamboo and ended up having half the topsoil removed in the process, a faux-Victorian rose garden (complete with gazebo), and it's been transitioning ever since toward small backyard farm.

I'm glad we got so much done this weekend, because it's going to be a busy one coming up.  I'm temping Monday, Tuesday and Thursday; Mario's birthday is also Thursday, so we have dinner plans, and Friday evening is the premiere of Sense and Sensibility at Hedgerow Theater.  A very good friend is playing Elinor, and I'm looking forward to seeing her, and also seeing a production I didn't have any part in costuming!

Sunday is another show, and I'd love to get a few more things done before then, but right now it's just fingers crossed; I don't know if it's actually going to happen.
Posted by Karen at 10:57 PM

I love the mini-greenhouse bottles, so cute! We've had a very strange winter in England, mild and wet - transitioning to what is supposed to be a very hot summer. I guess we all better get used to it, sigh.