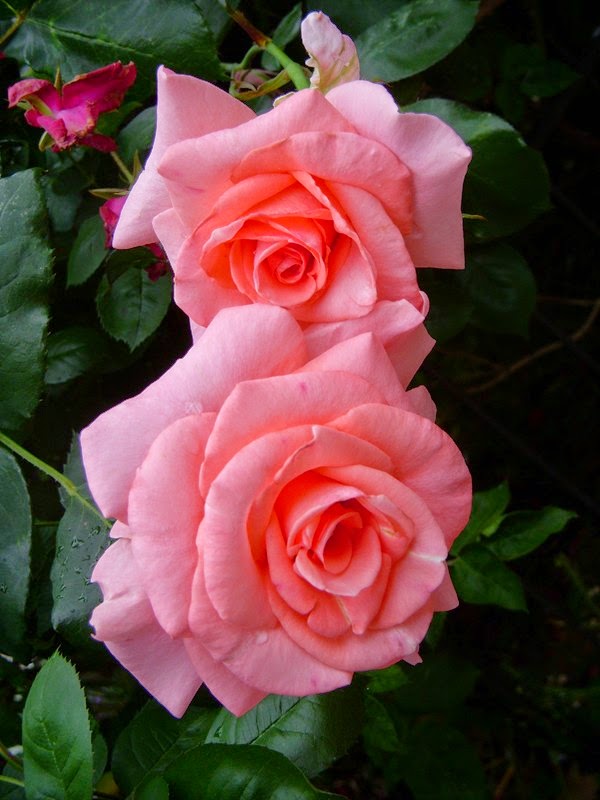 Once upon a time, there was an only child.  Boredom was the enemy, so I learned to do lots of things to occupy myself.

I read.  I played with my dolls.  I learned to sew to make clothes for my dolls.  I redecorated, then rebuilt, my doll house.  I read some more.  I made up stories, and acted them out with my dolls (it helped that, as an only child, I had a cast of thousands).  I started writing down my stories.

But writing fit.  I could do it in  my head, or after my mom went out and left me in peace, or after everyone went to bed.  When I was bored at school, I could listen to the voices and run home and write down everything they said.  When I started working, mindlessly typing for  lawyers, I could plot and plan and scribble on bits of paper and then do my own typing at night.

All this is leading to the fact that I write.  I have always written.  Other than this blog, which I started when my regular life was getting in the way of my writing (and I wasn't facing how much that bothered me), I haven't said much about it in public.  It was mine.  It was something that kept me sane through a lot of unhappy teenage years and all the times when I just didn't feel like I fit into my life.  The life in my head, well, that always fit.  Because I made it up.

There was one particular project I started years ago.  I wrote like a madwoman, researched, wrote some more.  Put it down.  Picked it up, got distracted, started dating, broke up, wrote my heart out, dealt with family stuff, changed jobs, more family stuff, changed another job, started dating again, got married - how did that happen? - and eventually came back to what had come before and in between all along.

And now, dear readers, I have what seems to be called a book.  A novel, if you will.  Tweaked and polished and pored over lo these many years.  I've let a few close friends read it to offer criticism and suggestions - and nearly expired in the process of handing my baby over - and now it's ready to be released into a wider world.

I feel sick to my stomach.  It's been mine for so long, but if it's done, isn't the whole point of a story to share it?

I recently finished a synopsis, because of course after you write an epic saga, you have to turn around and boil it back down to a couple of paragraphs, and I just started sending query letters to agents.  All this makes me dizzy, but I've done it.

What's the worst that can happen - that it'll go back into a drawer (or a hard drive) for another life cycle?  It's time to let go.
Posted by Karen at 5:01 PM

I wish you get published, and I wish you all the success in the world. I have a younger sister (now married and living in Arizona) who also writes, but she never got to the point where you are,... I think she's not ready to let go just yet and she's too afraid, she lacks the confidence to take that extra step forward. Her husband is trying to help her with that, I hope he succeeds :))
You are very brave! <3

Congratulations on completion! That's a major accomplishment most writers never achieve. Gather your courage for the next steps. You can do it!

You're on a roll baby!

It's exciting and not a little scary submitting your precious work for others' scrutiny. You write well Karen, your blog is interesting and your personality shines through. Que sera sera.

When are you starting the next one?

Wow! Congratulations and well done. I'm a song writer that hasn't yet had the courage to let anyone see my work. What if they hate it? What if they say I'm not a good song write? I've been writing songs since I was 9 years old. I have boxes of lyrics and scraps of paper with a few lines. So I understand the courage it took to let someone else read your book and wish you all the best!

Woohoo! I wish you all the best with your manuscript! Let us know how things go!

You have a band of believers out here in blogland cheering you on. I believe that the stars are aligning in your favor. Can't wait to hear that your book has been published :)

Congratulations and best wishes for success! The best thing about writing is that you can always keep writing!

I know two women who self-published books - one writes light chick-lit, and the other has written a couple of middle-school mysteries and now a romantic mystery. If you don't do well with agents, and want some of their real-world perspective, let me know and I'll give you their email addresses. Writing a book is a wonderful accomplishment!

I am so excited for you. To have persevered until you've reached this step is wonderful. Remember, Harry Potter was rejected 12 times before it found a home. I believe your book will find a home, too. I can't wait to see the cover!

Oh! Oh! OHHH! How exciting! How brave and scary but oh so exhilarating! Looking forward to the next installment in this saga!