A question of taste 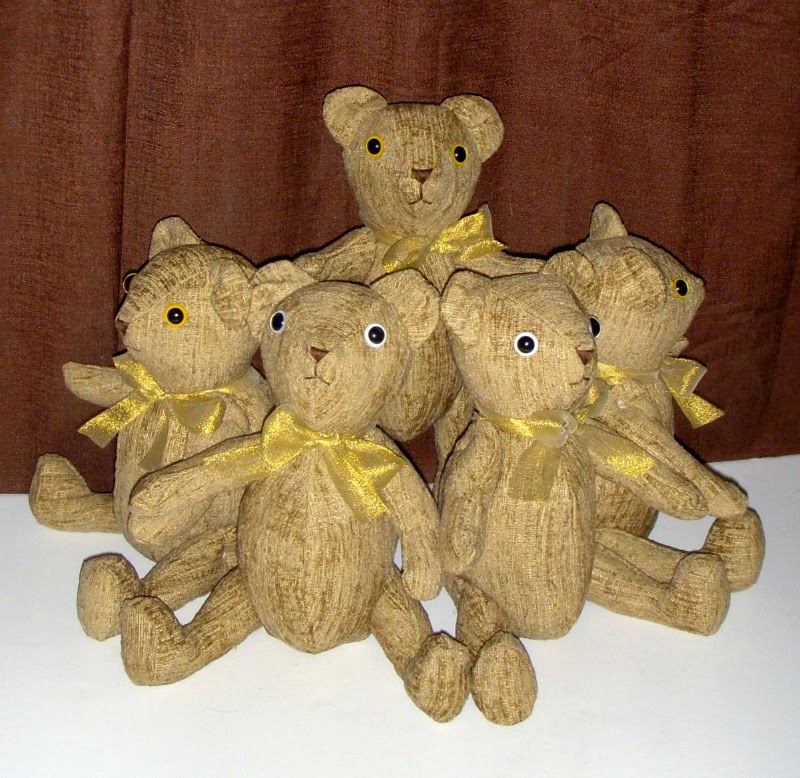 A friend recently gave me a bag of fabric she'd gotten from her mother-in-law.  Some of it was garment fabric (some even cut and pinned to some 1980s Vogue pattern pieces), but the bulk of it was home dec remnants from redecorating her house.   Now I've never seen this woman's house, but judging by what I ended up with, she's got very nice, quite expensive taste.

Which has, in turn, created the most tasteful series of bears I think I've ever made.

You know I'm the Crayola kid, right?  No color too bright, no combination too alarming.  So what made me look at these remnants -- an ivory damask and a burlap-looking velveteen the color of wet sand -- and go all woozy with the desire to cut them up?

I guess even the Crayola kid needs a dose of tasteful every once in a while.

The remnants stretched to two damask bears and five of the tan velveteen.  In the bag there was also a single gold organza square, not sure if it was a sample, a decorative (certainly not useful) napkin, or what, but I cut it into strips and used it as the bows for the tan bears.  I love the ragged look of the unhemmed organza with the smooth velvet bears. 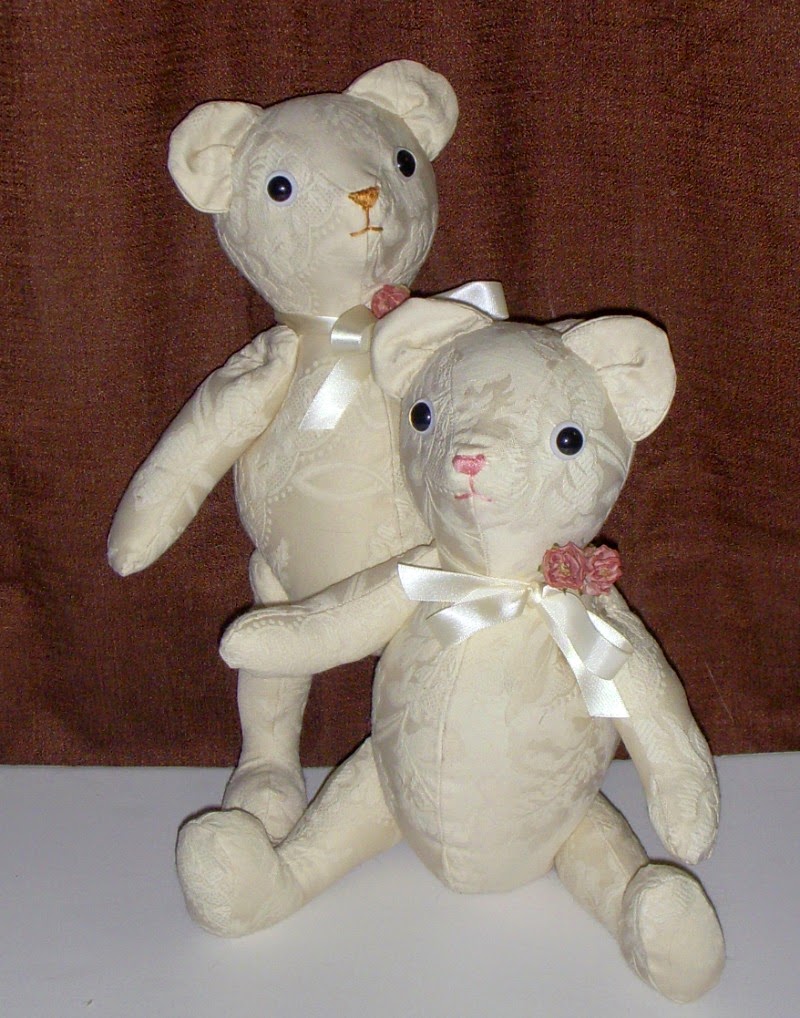 The damask ladies -- how could they be anything but? -- got ivory neck ribbons and a few vintage fabric flowers tucked in for good measure.

I think I've made a slightly demented wedding party here, what do you think?

In other news, it's still cold.  Yeah, I know.  February, and all that.  My pipes froze for the first time in 15 years in this house, which wasn't fun.  You don't realize just how much you count on things to work until you go down at 6:00 a.m. to run water for the chicken, turn on the tap and nothing comes out but a puff of air.

It didn't even occur to me that the pipes had frozen; I assumed something had broken out in the street because my neighbor had work done the other day after they broke pipes in their house and actually had water running out between the bricks into the alley.  But no.  I went to the basement and the water line was so cold my fingers stuck to it. 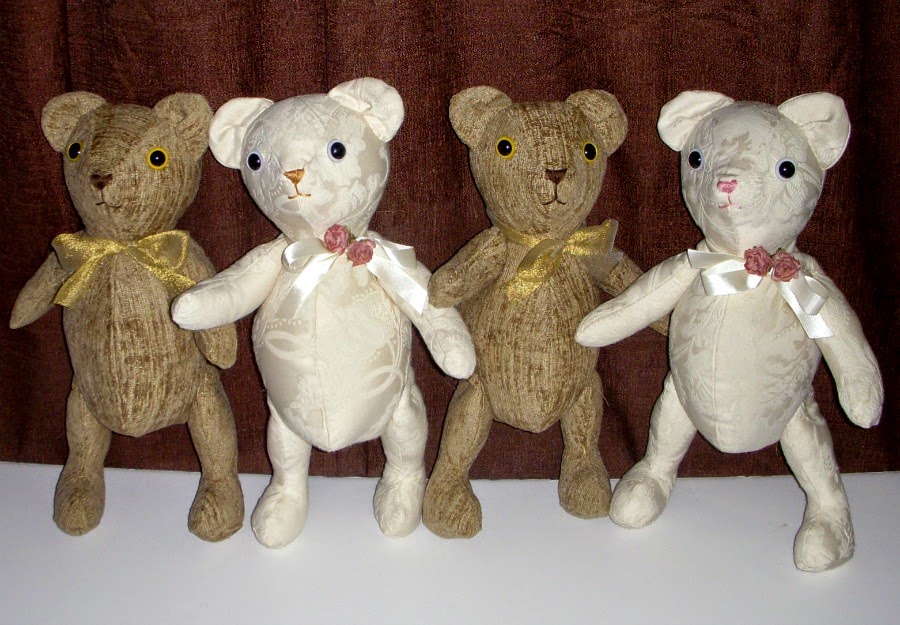 Naturally, I don't own a hair dryer, but our housemate has several of everything and she supplied a small one so that Mario could get in between the old oil tank and the wall and thaw the pipes out enough to get water running.  Then he went to work and I went to the hardware store and bought a heating kit to tape to the pipes.  The wire warmed up within a few minutes, and it cycles on and off as the temperature fluctuates.  Tonight it's supposed to go down to 2 degrees; I'm not taking any chances with the heat tape -- I'm leaving the laundry sink in the basement on trickle, just to be certain.

Rather a slightly higher water bill this month than a very large plumbing bill and a mess to clean up.  Yes, indeed.
Posted by Karen at 10:59 PM

Please keep an eye on the heat tape; not to be a downer, but there are terrible fires from that stuff failing and burning the house down. As you say, better to have a slightly higher water bill from the faucet dripping.......

And I am TIRED of being told that of course it is cold, it is February. In my neck of the woods most February days have many many days in the 40s and 50s.....not this year!

I usually love winter, but we have had so much ice and it's hard to get out and do much, so I too am ready for a break.
The Bears as always are so precious.

Love the new bears! Sometimes neutrals can be a palette-cleanser for the artist's mind. I'm in the northwest, and we are missing our snow--snowpack only a fraction of what it should be. This means that we will have a very bad fire season this summer.

The bears are really cute. I like colourful too, but tasteful certainly has its place.

Cold yes, but not THIS cold in Feb for this long. Our thermopump gave up the ghost yesterday. We have heat but the auxiliary unit costs more to run, electric bill will go up this month ! :-(