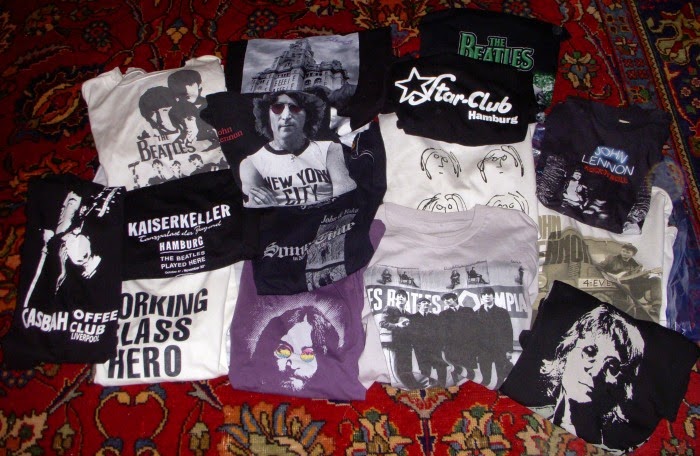 Let me back up a bit.  In October, I was contacted on Etsy about some custom pillows made from old concert t-shirts.  The buyer was moving shortly and most of her shirts were packed, so after some back and forth, she asked me to contact her after the new year when she would (hopefully) be settled in her new place.  It took longer than expected, but the job also grew a bit -- instead of a few pillows, we worked out that she would order a wall hanging/couch-sized quilt made from 16 of her treasured Beatles t-shirts.

Since she's now local, Mario and I swung past her condo yesterday and picked them up.  It's quite a bundle, 16 t-shirts, and when I spread them out, I could already feel the ideas start to percolate.

The only thing I've done so far is to cut them up, because I knew that if I didn't do that immediately, I would start feeling like they were too "good" to cut up.  Some of these shirts were bought new when she did a Beatles pilgrimage to Liverpool, London and Hamburg years ago, and a few of them were old, and almost sheer with wear (I'm especially touched that she was able to give those up).

There will be something more concrete to show soon.  I love the varying sizes of the images, and some of them have text on the backs -- the words to "Imagine," etc.  I'm looking forward to trying to include all these things into one (hopefully) cohesive piece.
Posted by Karen at 12:32 PM

What a fun project this will be!

What an exciting project. Can't wait to see the finished product.