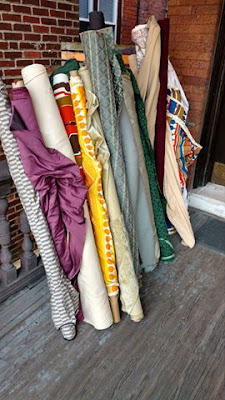 A week or two ago, I got a call from a friend.  She and I were in book club together for a few years, and now we mostly meet up at the thrift store on half price days.  (She's my kind of people).  She told told me that her next-door-neighbor had died recently and his niece and nephew were cleaning out his apartment.  "He was an artist," she confided.  "He made everything, with everything."  But what it finally turned into was, "Well, there's a sewing machine.  I'm not sure what kind, it's got spools sticking out all over it, maybe it's an embroidery machine?  Well, anyway, I told them you sew and they want to know if you want it."

I said it sounded like a serger, which I actually do not possess.  Never particularly wanted one, never learned to use one -- but also, according to policy, would never turn down one if offered.

I never, ever turn down donations.  Even if it's not something I can use, I know someone who can, and I never want to turn off the stream of donations.  Too much of what I make comes from that stream, and it's helped a lot of other folks out as well.

So I go around to get the machine, and they hand me a big Rubbermaid tub.  I thank them kindly and haul it home, only to unload and find out it's two sergers, an older Singer model and a relatively new Baby Lock Eclipse.  The Singer is complete (even to the manual), but the Baby Lock was missing its foot pedal and power cord.  I know I can source these, so it's not a big deal, but I did text my friend and mention the fact, and ask her to pass on to the niece and nephew that if they find it in the basement to let me know.

A few days later, I get a call from the nephew.  "We're at the apartment today," he says.  "If you want to come over and look for that cord, feel free.  You know what it looks like better than I do."

I text my friend to thank her for passing on the message and she sends a warning:  "Don't come home with anything!" 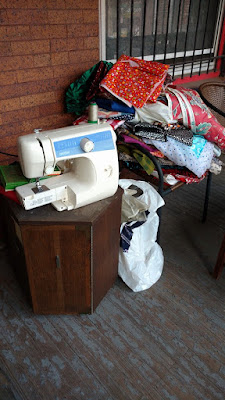 Shortly after, when I petted a passing bolt of fabric and said, "Pretty!" I understood what she meant.  If you like it, you take it, and but you have to take all its friends too.  I was driven home with 18 bolts of fabric, a bag of cut fabric and . . . another sewing machine, this time a recent Brother model.

The apartment was a treasure trove.  The late tenant was indeed an artist, and worked with everything from paint, clay, papier-mache, jewelry, rhinestones, taxidermy and who knows what else.  Every passing idea was given full rein, and every possible supply was purchased to support his habit.  It was glorious, and it looked like something out of a movie crossed with a particularly artsy episode of Hoarders.

As an example, the bathroom had a six foot long clawfoot bathtub.  Over the tub, mounted horizontally on the wall, was a series of narrow antique wall mirrors, the kind generally hung vertically between windows.  At the foot of the tub was a large angel sculpture, nearly lifesized, covered in rhinestones and faux ivy, and draped with -- what else? -- strands of twinkle lights.  The whole place was like that.

So now my downstairs hall looks like an explosion in a fabric store, and I actually had to fend off a donation of another six machines last week.  I did.  I said no.  Because they were vintage, and collectible, and the family could actually make money off them on Craigslist, and because where the hell would I put them in the meantime?

The recent Brother machine has made its way over to the place where I teach, along with a big blue Ikea bag of fabric.  The spring semester started recently  and the kids needed more stuff to work with.

And at the end, I'm really impressed that there's someone out there -- and who was so close by! -- who had even more sewing machines than I do.  It makes me feel a little less . . . hoarder-ish.

Though I have to admit, I'd like a big glittery angel looming over my tub.  Not sure what Mario, or the cats, would think about that.
Posted by Karen at 4:13 PM

What a wonderful SURPRISE! I know you make good use of everything or make sure someone does. Great haul.

What a score. It's so nice for the relatives to know it's not getting trashed but used and loved by someone else. Too bad you couldn't get that angel... I'd love to see that!

Treasures of one passed onto another who can and will appreciate them. Fortunately your friend thought of you as most likely all the stash may have ended up in a landfill. Enjoy!

What a wonderful find. I wish more people would know that there are plenty of quilters that would love most of the things left behind. A lot of fabric goes to the land fill.

That was quite the fortuitous haul. It reminds me of the way my LA-area quilt guild gets much of our donations. See the end of the post. We also get stuff when people move out of the area.
http://badmomgoodmom.blogspot.com/2016/04/supplies-not-stash.html

Did the relatives understand your message about the other vintage machines being worth a lot of money? I hope the relatives get the $$$ and the machines find appreciative homes

Congrats on the Babylock Eclipse! If you're going to get a free serger that's the one to get in my book! Love that some donations stayed with you and some were forwarded onto others to learn to sew with...good looking out!

What a bunch of lovely donations! And the Babylock Eclipse, wow! What kinds of fabrics were there?

Oh my, that is quite the batch of donations you received. I have two sergers as well and they are definitely in my top machines.

Wow, what a nice score! I'm sure all of your newfound goodies will be used/donated to the good. Lots of nice projects in there from what I see!