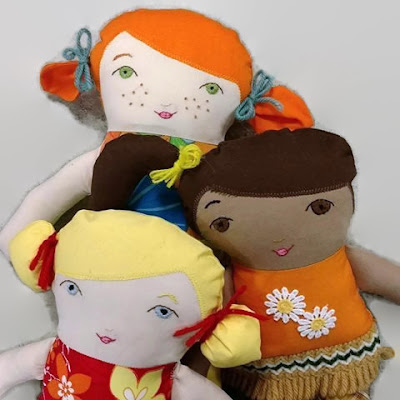 A while back I mentioned I was working on something new that wasn't ready for prime time.  Well, allow me to introduce my latest make, a cloth doll made from upcycled fabrics.

I've been meaning to share them with you for a while now, but the first batch of girls went out to craft shows before being photographed (beyond this single shot) and . . . they sold.

Four of them the first show, four more the second, three last time.  Plus two custom ones.

So I guess you could say they're working out.  I'm pleased with them -- not only do they seem popular with both kids and adults, but they're yet another way for me to use scrap fabric, yet another way to reduce my business's carbon footprint by using what's already available.

Their faces are hand embroidered.  I do them in the evenings when Mario and I are watching TV.  Or when he's watching TV and I'm sitting on the couch, embroidering like a fiend because I just can't absorb any more of the outrage spewing from every news outlet -- including the ones I agree with.

Hair colors are everything under the sun, including a few with pink and purple hair (which have sold).  I was thinking mermaid/fairy when I did the pink-haired ones; now I think I really need to make a few with mermaid tails.

My next show isn't until Saturday June 4th, when I'm the featured artist at out the Swarthmore Farmers Market.  That's always a great town for me, so I intend to have a whole new batch of dollies for them.
Posted by Karen at 8:55 PM

Those are so very cute. I can see why they do well.

I love your dolls and your owls! Nice job!