It has ceased to be 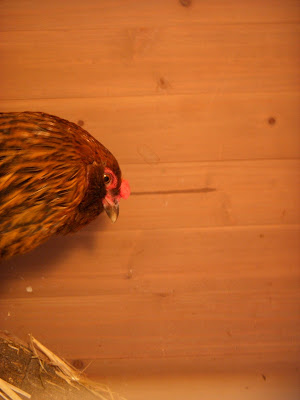 I went out to the coop yesterday morning to feed Bonnie, and she wasn't downstairs waiting at her food bowl, like a feathered, personality-free version of my cats.

I opened the roost door upstairs, and there she was, head tucked under wing, no longer a live bird.

Cue John Cleese, who has been banging on in my head for the rest of the day:


"That parrot is definitely deceased.  It’s not pining, it’s passed on.  This parrot is no more!  It has ceased to be!  It’s expired and gone to meet its maker!  This is a late parrot!  It’s a stiff, bereft of life, it rests in peace.  If you hadn’t nailed it to the perch it would be pushing up the daisies!"

Awful, I know.  But Bonnie hasn't laid in the last 6 weeks, and I assumed that meant she was aging out of the breakfast business.  And I've always considered her an employee, not a pet.  She fed me in exchange for food.  Our relationship lately had become a tad one-sided, and I'd been mentioning my handy cousin and the slow cooker with increasing frequency.

I may not get new birds until next spring.  I'm well into craft show season, plus I'm temping 3 days a week.  On top of that, Mario and I have planned a trip (to London!!!) in the fall, and this will be one less mouth our housemate will have to feed while we're away.

I leave you with Monty Python, because I can.
Posted by Karen at 10:17 AM

Farewell to Bonnie--I do hope you get a chicken again because I've loved the stories. Selfish, I know :)