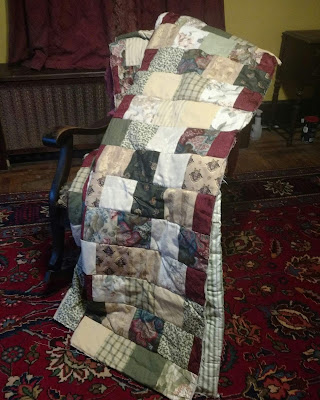 I saw a UFO the other day.

It wasn't in the sky; it was in my workroom.

Let me explain.  My workroom is always a mess; I tend to work better when there's a bit of chaos around, but even I had gotten to the point where I realized it was out of control.

On Friday, January 20, I decided that the best way to spend the day was to avoid the TV at all costs, and start cleaning the room.  It helped that I had just sold something on Craiglist that was currently in the room, under a pile of fabric, holding apparently even more fabric.  So I started there, pulling out the vintage trunk (which was absolutely beautiful, but round-topped and so hard to stack on, and, embarrassingly, there's another one in the attic anyway) and emptied it.  There was a ton of fabric in there that I could use right now, some of which I'd forgotten I owned.  So that's sort of a win?

Continuing on all week with the TV avoidance (though not social media; if we're friends there, you know my feelings and how abundantly I've shared them), I got the trunk out, added a metal shelving unit from the basement to better organize fabric, cleaned out the standing cedar closet (and its stackable bins inside), threw out/donated another 3 trash bags of stuff, and thought I was finished.

There was one more trunk left under the table, and against my better judgment,I moved everything aside and dragged it out.

Inside was stuff I literally haven't seen in over a decade, including a quilt that I started making shortly after I bought the house (2000), and drafted a review for in Patternreview's UFO Contest back in 2006 (but never posted because it didn't get finished after all).

I was trying to stitch down the rows of squares on my machine, and I didn't notice until I'd sewn a few rows that the backing fabric had gone crooked, pulling the whole thing out of alignment.  Instead of simply picking the stitches out and starting over, I folded it up and shoved it in a box.  For 10 years.

Last night I laid it out on the bed, over top of the comforter (which actually came with me when I moved in 2000), and it looks really good in the bedroom.  I fetched a seam ripper, ripped out those three rows of stitching, grabbed some  yarn and a big needle, and yarn-tied the entire thing in an hour.

So now all I need to do is bind the edges and I can add the 16 year old comforter to the donation pile and sleep the sleep of the righteous under my finally-finished UFO quilt.
Posted by Karen at 11:00 PM

Don't you just love when that happens? Something you couldn't be bothered to fix at the time resurfaces with most all of the work done and then POOF! You finish it and HAPPINESS!