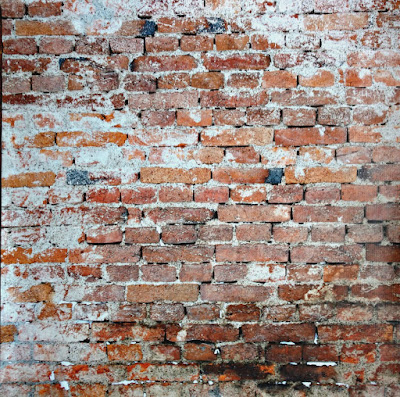 Okay, so politics. I try not to do this here, other than immediately after the election -- but if you know me in person or on Facebook, you know my feelings about everything that's happened in the last few weeks.

What has been interesting to me is finding out what I actually believe. I mean, I was outraged at the idea of a Muslim ban and that the idea of building a wall. But being outraged and then actually seeing the crowds protesting in airports when people -- who were vetted, had visas, or were actual green card carrying already-citizens of these United States -- were turned away, well that was a different story. That was really, really upsetting to me and it took a while to realize why. Turns out I actually believe that whole Statue of Liberty "give me your tired, your poor, your huddled masses" thing.

And hello, there's this whole Wall thing. I always thought it was an awful idea.  Knowing how much it's going to cost, and whether Mexico ever pays for it -- which they won't -- there are so many better, more practical, more humane things to do with those billions of dollars. People who are in favor of the Wall and/or the ban say we should take care of our own before accepting refugees from other countries.

For $14 billion, we could take care of our own, and still accept refugees. We could take care of our own for far less than that, but we haven't. And this isn't directed at anyone in particular. There are a lot of good people out there -- and I know quite a few of them -- who do the right thing, and who do more than their fair share. Any finger pointing here is at the government, at Congress, which has never come up with a plan to take care of all Americans and been able to pass it.

So, the Wall.  Flash forward to Super Bowl Sunday.  I'm not a football fan.  If I watch of the game, it's the commercials and the halftime show. and those are conveniently located on YouTube so I don't even have to turn on the TV.  I did watch the commercial from 84 Lumber that got all the controversy  I saw the both versions, the one was shown on TV and then the unedited version and honestly, when the woman and her little girl walk up to this huge ass Wall, blank-faced, towering over them, it was a gut punch.

This Is Not Who We Are.

Are there people in the country who don't have proper paperwork?  Yes.  Have some of them committed crimes?  Yes.  Could someone admit, though, that there aren't very many of the criminal variety and that the "undocumented" variety of people don't have it easy, and aren't living high on the hog on our taxpayer dollars?  I'm sure they'd rather be legal.  I'm sure they'd rather be able to live in the country of their birth and make a living wage.  I'm sure most of them aren't making much of a living wage even here in this land of opportunity, but that is no reason to slam a door or build a wall in the faces of people who come to this country looking for something better, much less escaping probable death.

The times when America shut its doors -- turning away a ship full of Jewish refugees during WWII, sending them back to the death camps of Europe, or interning Japanese-Americans because they looked like the enemy -- are low points in our history.

I don't want to be a part of the next low point, and I will do everything I can to prevent it.

** I've heard the comments speculating that 84 Lumber actually made the commercial about the door, because during the campaign it was said that after the wall was built, there would be a "big, beautiful door" for those who were legally allowed to enter the country, and others who said that it was basically a recruitment ad for day laborers for construction companies; I don't care.  It had an effect on me, which is to make me believe, more fervently than I knew I did, that my America isn't about walls or bans, but about inclusion.  Unless we're Native American, we all descend from people who came here from somewhere else, and those people all merged into this country with varying degrees of difficulty, but they did, and we're here now to prove it.

There comes a time when you have to speak. I am Jewish, but my family came over before the 1920's ban on Eastern European immigrants and Jews. We were the lucky ones. We cannot repeat the past. Trumps Holocaust Remembrance day speech without any mention of Jews was an abomination and Jews were right to be incensed. We must be incensed and vocal about not turning away immigrants.

I don't live in the US, but I think I can say the world is watching with anxiety. As a world we are heading towards the mainstreaming of anti-science sentiment, fear-driven xenophobia and far right ideas. This is always scary, and historically it hasn't ended well. We need to rise above our human tendency to pull the ladder up behind us.
You put it well.

I appreciate political comments, they are very necessary. I find myself wondering what planet some bloggers are living on when I read a blog that has not posted any concerns about recent events.

I saw a post recently where someone stated that the city of Flint Michigan still doesn't have clean drinking water, if the administration/congress/the senate just took 10% of that $14 billion and cleaned the water they would do more good than building that dayum wall.

...and America hasn't been fair to anyone who didn't come over with the Pilgrims and don't get me started on slavery, Jim Crow laws and how inequality still reigns for Black Americans today. Because contrary to what 45 is sprouting, we have good jobs and don't live in the inner cities but in his America that is the only place black people live.

Completely with you--I can't be silent any more. These changes are awful and not who we are as a country. I couldn't be more opposed to the proposed wall, the travel ban and don't even get me started on the idea of a registry.

Thank you. We all must stand up against this corrupt administration. The recent confirmations make it clear that dismantling America is the ultimate goal.

I live the other side of the pond so really I don't have a right to comment. I generally follow my gut and all I see so far is disaster, this is not the right man for the job and he seems to have an awful lot of 'yes' men around him. A man who cannot take advice is not worthy.