A tale of two eggs 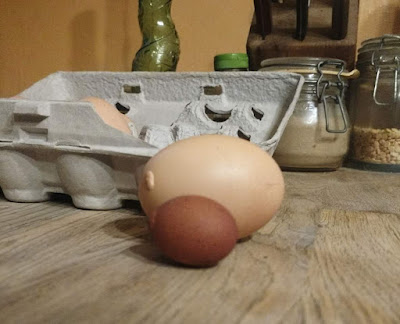 I went out to the coop this morning at around 7:30, like I do every day, to feed and water the girls. Generally there aren't any eggs this early in the day, but sometimes there are - their schedule changes up every so often, and now that the weather is cooling off they're laying a little inconsistently.

This morning I found the small, dark egg pictured here. It's one of Frankie's, I know because of the lumpy little deposits on the end of the egg. The egg behind is also hers, from Thursday.

Apparently this is normal, though not common. Sometimes an egg launches prematurely. There's a good chance there's not even a yolk in this one, and if there is, it will be as tiny as the rest of the egg. The difference in color is also accounted for because it spends less time in the area where the color and hard surface are acquired.

I don't quite understand it, but for those who are interested, here's a link which explains it better than I can.
Posted by Karen at 1:46 PM