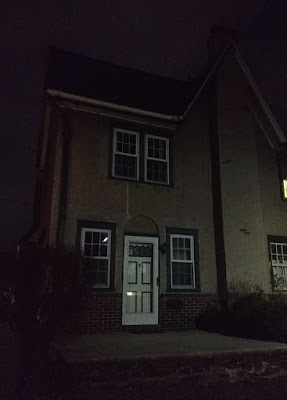 I scheduled the movers to come this Friday, and we've been packing nonstop and driving a load over every evening.

The floor is coming along. The best thing I found to use on it was Dif wallpaper stripper,which has done a decent job of softening the crud.  I still need to scrape, but it's going faster.

One unexpected delay: my contractor, who had a nice to do list of ceiling fans, outlets, gas lines, etc., vanished. Or at least went incommunicado.  Being Facebook friends, I checked to see what was up, and found out that he'd fallen off the wagon after 17 years of sobriety.

I know it's far worse for him than for us, but I'd be lying if I said there wasn't an element of "Why us, why now?" in my mind.  I did actually attempt to replace him, but the new electrician and plumber both failed to show up, and he did.  So . . .

As of tonight, we've achieved 3 drywall ceilings upstairs, a new fan in the bedroom, a fan in the kitchen, some tweaks to the breaker box downstairs, and tomorrow he's finishing the lights in our workrooms, the hallway, the dining room, and if there's time, he'll run the gas line for the stove.

Maybe it's wrong, but I'm not mentioning the fact that our move has been put off until Sunday.  Friday it's supposed to be rainy, snowy, windy and unpleasant.  I've never moved in the rain yet and I'm happy to have the flexibility to be able to shift everything to a better day.
Posted by Karen at 10:33 PM

its great to have an overlap and be able to do those things.

At least you will have stories to tell about the move to the new house! Good luck with getting things finished and with the move.