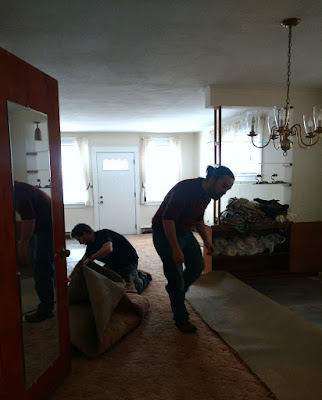 We made settlement on Monday, and arrived at the title company's offices with our car loaded up like the Beverly Hillbillies on their way to California.  As soon as the last papers were signed, we dropped our first load of stuff at the new house.

Although it's much smaller than our current house, it seems to be absorbing things well enough so far.

Saturday we rented a friend's son-in-law for the day so that Mario would have help removing the first floor carpet and pad.  They knocked that out really quickly and managed to get the drop ceiling out of the two rooms on the second floor before we had to return him.  I got the kitchen painted while they were doing all that.

The only thing slowing down progress right now is the remaining gunk on the living room and dining room hardwood floors.  The carpet was laid in 1968, and despite nearly 50 years of use, it was still in really good shape (though a totally different color than it was originally, which we only realized when the sofa came out).  The pad also seemed pretty springy, but when it was pulled out, it was obvious that 50 years of foot traffic and yearly rug shampooing had caused some of the foam pad to stick to the hardwood.

Other than that, the wood is in excellent condition, still with a nice shellac shine.  I just spent a good 4 hours yesterday squatting, kneeling and lying on the dining room floor with a pastry cutter, which turned out to be the best implement on hand to scrape with.  I tried wetting the dried foam with a solution of dish soap and water, and that helped a bit.  Someone else suggested vinegar and water, on the assumption that vinegar cuts almost anything.  Another person suggested wallpaper stripper as a non-toxic option that removes unpleasant dried-on substances.

I'm open to other suggestions, if anyone has one.  What would you use to soften dried-on, dried-out carpet padding stuck to shellacked floors?
Posted by Karen at 2:16 PM

I have no suggestions but wanted to say congrats on signing and starting the moving in process!

Clearly something that dissolves glue. Have you thought of GooGone?

I recall working on am much older carpet pad stick problem with vinegar and water and a hair dryer to heat the resulting soup. It was grim however.

Congrats on your new to you home.

Have you tried a steamer? The combo of heat and steam can soften the crud and make it easier to scrape. Also, do you have a plastic scraper?

Congratulations on the move!

A solution of fabric softener and water works really well to remove old wallpaper - might it also be useful on old foam?

Forward progress is always nice. When getting rid of something completely different (old mastic under floor tile) we found that best was boiling water soaking a rag that was left to poultice the gunk. Having an electric kettle was very handy. When it was cool enough to work it often scraped right off. Of course this is completely different chemically, but if you really have a shellac coating on the hard wood rather than a polyurethane or other polymer, stay away from anything alcoholic, or the boiling water.

Congratulations on your new home, Karen. I hope your move in is a smooth one. Sorry I don't have any tips for removing the gunk from the floors.

I don't have an idea on removing gunk but did want to say be careful when ripping all that old stuff out. I had old carpets removed and wood floors installed in Jan and apparently the mold in the old padding made me really sick. I am still dealing with secondary bacterial infections from mold spores and now have to clean ducting and replace furnace filters and air purifier filters. lesson learned was always wear a face mask. It is probably too late for you and hopefully you guys are fine but it shocked me that it happened and my carpets were only fifteen years old. But very excited for you and your new home. Post lots of pictures!