Next book - details and deadlines 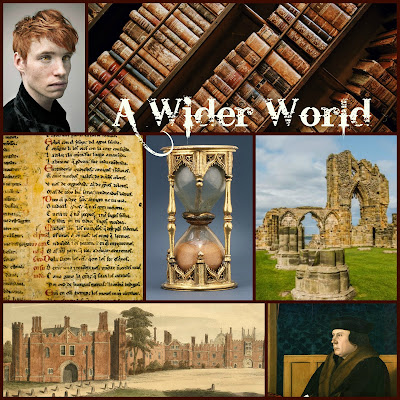 The internet is a strange and wonderful place. It gives so much and it takes so much (time) away.

Every once in a while, when I fall into a hole online, something useful comes out of it.

This is the inspiration collage for my next book, tentatively called A Wider World. It's not a sequel to Songbird, but it does involve one of the secondary characters, Robin Lewis - a character I wasn't fond of at the time, but who reached out a few months ago to justify some of his behavior and tell me his story.

And it's a good one, so far. It's set over a much longer period than Songbird, so I'm researching fun things like the Dissolution of the Monasteries, Thomas Cromwell, Renaissance-era libraries, and the reigns of Edward VI, Jane Grey and Mary I (of which I know the basic facts, but not enough to hang a story from).

I'm giving myself a deadline of January 31, 2020 (my birthday) for a completed first draft. Which doesn't mean it will be published anytime soon, but after how long it took me to get my act together the first time, I'm pretty sure this will move much more quickly.
Posted by Karen at 10:44 AM

THat seems amazingly fast - did you produce your first draft so quickly?

Ceci, it's nowhere near done. I'm hoping to have the first draft done by the end of january, but there will be a lot of work left after that. The photo collage is to keep me focused and to let you all know that there's something else in the pipeline.