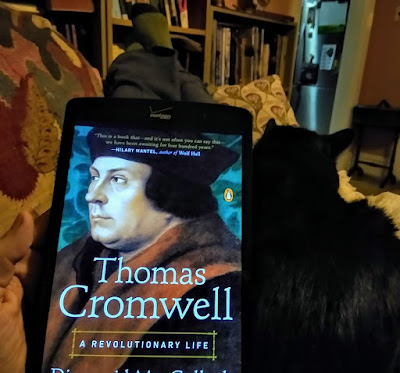 I'm a little late for Thanksgiving, but that doesn't stop me from still being grateful.

It's been quite a month, folks. I can say that, now, on December 1st. Songbird came out on November 3, and while I don't know how many copies I've sold thus far - I'll get numbers from my publisher soon - I already have THIRTEEN five-star reviews on Amazon, and more than a few of them are from people I don't know.

There's also the fact that I've got a book event set up at a local library in December, and another one at Shakespeare & Company's Philadelphia store in January, both of which I find mildly terrifying and which I will manage to do anyway, because I can.

The draft of the next book is progressing nicely, though because it goes beyond the death of Henry VIII into the reigns of Edward and Mary, I'm having to do a lot of reading. Right now I'm knee-deep in a biography of Thomas Cromwell, which would be fascinating if I wasn't doing what Mario calls "readsearch" which is exhaustive and exhausting because I'm taking notes while reading, and it slows down my enjoyment of the words.

I'd already found Cromwell interesting from reading Hillary Mantel's fabulous Wolf Hall - oh, how I'm waiting for the third installment in March! - but the reality isn't much different from fiction in his case. The man did a lot in a relatively short life (died in his mid-50s) and my main character in the next book spends a significant chunk of time with him, so I need to know a lot so I can only put in the important bits. It's surprising how much you have to know to understand how little you need to include to give the flavor of a time period, or a person. The first draft is definitely an info dump, at least for me.

I hope you all had a wonderful holiday, that your families - if you were with them - weren't too annoying, that your turkey was moist, your cranberries were in whatever format you prefer, and there was adequate pie. If your Thanksgiving was solo (I did holidays alone for years and loved it), I hope the wine was good and the Netflix entertaining.
Posted by Karen at 12:19 PM