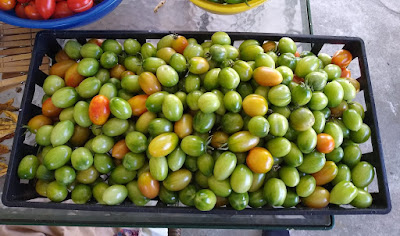 And so it goes, the end of another growing season.

This was a particularly good one. I'm not sure if it's because I didn't overextend myself and try to grow too many things, so that the ones I did plant worked better, or if it was just a good weather year, or the garden was the one part of 2020 that worked out as anticipated.

I took out the last of the tomatoes the other day, and this was the amount of green tomatoes still on the vines. We've had some colder nights, so the vines were dying back, and I wanted to get the fruit off before they got frosted and squishy.

There was an equal amount of red tomatoes, so I threw those in the crockpot and made sauce, which I later canned, but I didn't have the energy to face all these green tomatoes in addition to the number of jalapenos that were left, which also needed to be canned (more candied hot peppers for the pantry).

My local Buy Nothing group made short work of the green tomatoes. The ones that were left moved around the corner to a neighbor's house. She's a distribution point for USDA food boxes, and lots of neighbors put extra food on her porch for "shopping." So she got the tomatoes, and they were gone by nightfall.

Now I can look out at my barren back yard, and start thinking about 2021.