The saddest story in Tudor England

I'm currently working on my third book, titled Lady, In Waiting, which is set during the early years of the reign of Elizabeth I. One of the side characters - someone I hadn't planned to write about but whose life and story couldn't be avoided - is Lady Katherine Grey.
Younger sister of Lady Jane Grey, the unsuccessful Nine Days Queen, Katherine's life was slightly longer, but just as unhappy. Because of her proximity to the throne (she and Mary Queen of Scots were Elizabeth's two natural heirs, unless she married), she was watched and not permitted to marry.
But she did. And she got pregnant. And she didn't get caught until her eighth month, at which point she was put in the Tower - separately from her husband - to think about what she'd done. She gave birth to a son, which must have made Elizabeth furious. 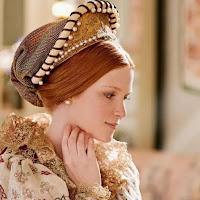 Remaining in the Tower, she managed, by way of a sympathetic jailer, to have conjugal visits with her husband, and eventually gave birth to a second son! That did it. Elizabeth separated the already separated couple, sending the husband and older son in one direction, and Katherine and her baby in another.
Katherine died in 1568, at the age of 27. She's not the most sympathetic character, despite her unhappy circumstances, and because of the prominence of her story, she couldn't be ignored and is now an important side character in my story.
Pictures: the real Katherine, and a photo I snagged from the internets which is my inspiration for her.
Posted by Karen at 11:09 PM

Sounds fascinating, can’t wait for this one!