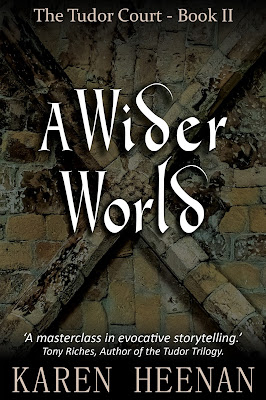 Well, here it is, folks! The gorgeous cover for A Wider World, designed by Anthony O'Brien and featuring another ancient ceiling. (I'm sensing a theme here).

The book will be released on April 25, 2021, but if you're an e-book reader, you can pre-order it now on Amazon. I can't tell you how much pre-orders mean to the way Amazon decides to promote a book.

“They said I would not end well.”

“And so you have not.” The young man has an air of self-importance, something he should have outgrown by now—but perhaps not. He has, after all, arrested me; mayhap he should feel arrogant.

I walk toward the fire, smiling as he moves out of my way. “I did not begin well, I will grant you that. And my middle was…middling.” The heat warms my face, masking any flush of anger. “But my end is not yet accomplished.”

He speaks again, his confidence recovered. “For your nefarious history with Thomas Cromwell, for your role in the destruction of the monasteries, and your attempts to dismantle the one true church, for promoting Luther and the English Bible, Her Majesty charges you with heresy.”

I ignore him. “You, who have interrupted my supper with your warrants and demands, who are here to see me to that end—you have no idea of my beginnings.”

Mongrel, they called me. Bastard. Unloved, I should have withered. I did not. I forced myself to flourish, to prove the world wrong.

“The world did not, early on, consider me of enough importance to care whether I lived or died. Now, I have achieved importance in the eyes of some—though only some see my true value. Whether you come to see it remains to be seen.”

The young man—William Hawkins—snorts. A laugh? A sound of disbelief? He drops into my empty chair, his black boots stretched toward the blaze.

I watch him in the small convex mirror, which stands on the cupboard, a memento of my Venetian travels, just unpacked. “You were told I was clever, to beware my words. I do not appear dangerous, do I?” A man of fifty-odd, dressed in clerical black. Thin to the point of gauntness, though seemingly healthy. A man with few attachments in this life, and those well concealed. “I can see you are interested.”

Hawkins demurs, but his eye stretches at my words, and I continue, “The storm will not abate before morning. It is not solely in my own interests that I suggest you ask your men to stand down.”

Hawkins is unwilling but sees sense in the end. I try not to listen as he speaks to his men. Nine of them—as if I require an army to be brought to justice. They shed their wet cloaks and settle themselves in the hall. I’ll have ale brought out; their goodwill will be more easily won than my captor’s.

I look at him again. He gives the impression of wearing armor, but in truth, he has nothing more than layers of damp wool, like the rest of us, with a well-cut doublet on top to show his status. “We may as well pass the evening in conversation.”