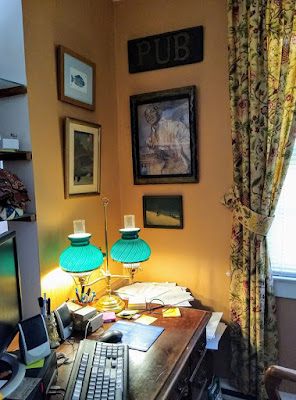 So it's been a while. How can it be hectic when time still doesn't have the same meaning it used to?

So we've just passed the one year anniversary of nearly everybody staying home. Remember when we thought it was just going to be a few weeks? I'm thrilled to be past the rubber gloves and wiping down the groceries phase, and I no longer forget my mask when I leave the house, but the fact that it's been a year astounds me.

I'm very lucky that I was working from home already and the pandemic has changed my work life very little, other than that I actually got more done than before (having few places to go). I have some guilt about my productivity, but that's not useful, and I'm trying to get past it.

I'm also extremely lucky that Mario has the kind of job he can do from his office upstairs - and that my office is downstairs. I love him to death, and I always thought it would be nice if he could work from home. I still feel those same things, but when life opens up and he starts going back to work, at least part-time, I'll cope. I read an article recently that talks about "aloneliness." We know that loneliness has been a problem - so many people were isolated who had never experienced it before. But what about those of us who need significant amounts of alone time to feel at all normal? We are "alonely," we're lacking in loneliness.

Mario's presence in the house doesn't affect me that much, but when I'm working, I like to read my writing aloud, and that usually elicits a "what did you say?" from upstairs. I also sing - albeit badly - to the cats, and eat, or not, depending on how busy I am. It is disconcerting to find that most people want to eat three meals a day, and on a somewhat regular schedule.

All this is to say I have nothing to complain about. We're well, and so are our nearest and dearest. I've known people who've gotten sick, but they recovered. The most fragile people I know have been vaccinated, and even Mario and I have achieved our first vaccinations, with our second shot scheduled in the beginning of April. A local clinic had more vaccine than they had arms to put it in, and put out a call for neighbors because it was almost time to shut down, and the Pfizer vaccine doesn't keep. We grabbed an elderly neighbor and made it in just under the wire.

I have been terrified of needles my entire life, and was a little nervous about this, but was going to suck it up, because what's worse, a jab in the arm or Covid? Mario finished first and sat on the floor next to my chair and held my hand, but I won't need him to do that for the second shot. What I mostly felt, when it was done was gratitude. It's not over yet but it's finally feels like it's beginning to end.

And that's enough for now.

Your blog today, really spoke to me. I too, had my first vaccine and waiting for the second. And I have been urging all those that aren't okayed yet by our state standard to be calling around to see if they can get the ones not used. I hope you continue to stay safe and well. Jean