So I just finished Chapter 70 of the audiobook for A Wider World. I still need to do edits for Chapters 64-70, but they will be minimal. I'm so excited to be able to share this with you!
As a preview, here's Chapter 1, read by the talented Jared Reed. Just follow the link and let me know what you think!
Posted by Karen at 3:49 PM 1 comment: 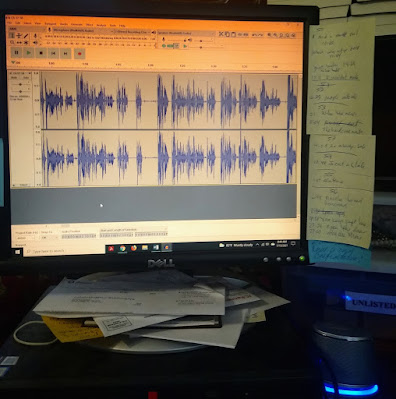 There is a strange intimacy with preparing an audiobook. Not only my own words, but the reader’s voice, in my ears, saying words I’ve worked so hard to make right. It’s disorienting, in a way—the feeling those words no longer belong to me.

Which is only right. They don’t. Once a book is published—I won’t say finished; books are never finished—it no longer belongs to its author, but to the people who read it, and who bring their own thoughts and opinions and life experience to bear upon it.

Despite how much effort I’m putting into making this audiobook as good as it can be, I’m not a big fan of the form. I like to physically read a book, and let my mind supply the voices and the pictures. Having someone read it to me takes away a bit of that, and if I’m honest, I also find it hard to keep my attention focused. I’ll hear a good line and start to think about it, and realize suddenly that I’ve missed half a chapter and have to go back and re-listen, ignoring this time the line that distracted me in the first place.

But A Wider World’s audio is coming along so well. He’s finished 66 of 70 chapters, and I’m up to chapter 64 on the edits. I can actually see it being completed by the end of July, which means it will be in the hands of my publisher for final mastering, and will be up for sale sometime (hopefully) in the fall. 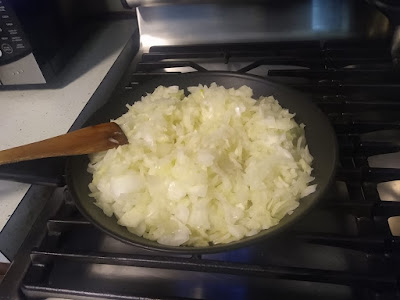 I wasn't being a deliberate tease with yesterday's post, but if anyone wants to try my favorite mejedra recipe, I've written it out below.

A few caveats: the recipe can be made with either rice or cracked wheat/bulghur. I much prefer cracked wheat, but you will have to adjust the amount of water you use in that step, because it puffs up more than rice.

Also, don't be afraid of the amount of onions. They cook down, mix in, and you'll never realize you've used an entire bag.

1.  Rinse the lentils, strain and place in a large pot with 5 cups of water. Bring to a boil, then reduce to a simmer and cook covered until the lentils are tender but not fully cooked, about 15 minutes. Most of the liquid should be absorbed.

2.  Rinse the rice/bulghur and add to the lentils. Season with salt. Add 2 cups of water (2.5 for bulghur), bring to a boil, then reduce and allow to cook down, about 15 minutes. Remove from heat and allow to rest. You may need to add more liquid, especially if you've used bulghur - it's very thirsty.

3. In a separate pan, heat two tsp. olive oil on medium heat and saute the chopped onions until golden brown and carmelized, about 15 minutes. Add to the lentil mixture, stirring in along with the cumin.

4. In the now-empty onion pan, heat the remaining 2 tsp. of olive oil and fry the sliced onions until golden brown, about 15 minutes. At the end, turn the heat up to high so that the onions get crispy. These are your topping onions.

Serve with yogurt, sour cream, hot sauce, or any other condiment that strikes your fancy. It's remarkably versatile. I sprinkle sumac on top because that was how it was always served to me.

Another option to make it more savory is to stir in a pint of plain tomato sauce in lieu of some of the liquid when cooking the bulghur. It doesn't add a specifically tomato flavor, but it deepens the overall flavor of the dish.

A piece of my past 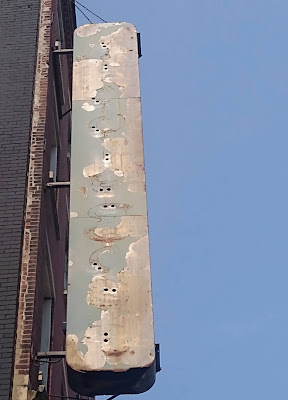 Two of the most gloriously technicolor years of my life were spent behind this sign, which read, in its glory days, Middle East.

It was a restaurant, a bar, a gathering place, a dysfunctional man supermarket, and for a while, the place where I felt most at home and alive.

Strangely enough, it had also been a part of my life when I was a kid. The Middle East was my mom's favorite place to go out for dinner. She judged her dates by how they responded to the belly dancers, working for tips, and when she had enough drinks, she got up and joined them. She said she knew she'd had one too many when the Arabic waiters started to turn blond.

I drank there, a lot, but that never happened to me.

Years later, in my late twenties, a friend started taking belly dance lessons. The guy she was dating thought it was cool until she got good at it and wanted to try performing. Then he wanted her to quit, so she quit him. We started hanging out at the Middle East so she could convince them to let her dance there.

After that, I went on the payroll. I worked the door for their upstairs music nights, I hostessed at the comedy club and at the restaurant, and eventually, when my law firm job got to be too much, I started working days in the basement office, helping to organize a business that looked like it ran well but was total chaos behind the scenes.

I slept a little, drank a lot, ate mostly Middle Eastern food, and was absorbed into a family both real and found. While I mostly worked the upstairs concert venues, it was the Middle Eastern music that had gotten its hooks into me young, and while I never wanted to dance, I can, if pushed, make a mean belly dance costume.

Also, I still love Middle Eastern food. I've been making mejedra all through the pandemic. It's a one-pot meal that I can make on a Monday and that will last us for lunch all through the week.