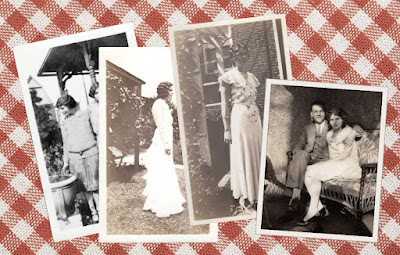 Most of the histories we read are about men. There are women, of course - all those men had to marry and someone had to bear their children to continue the family line - but much of history is silent on women beyond those roles.

That's the history I grew up reading.

The history I grew up hearing was told by women about women, centering them and their daughters and sisters and mothers.

Men - feckless husbands, charming but disappointing sons, some simply dead before their time - were peripheral to the stories I was told.

My grandmother Madeline - Maddy or Nan - had two husbands (divorced, separated) and three children (Margaret, Violet, and Harl, my grandfather - who managed to be simultaneously charming, feckless, and disappointing, and he died young).

Margaret had two husbands (and two divorces) and one child, Betty.

Betty had one husband (magicked away from his wife, Margaret's neighbor and friend) and no children.

Violet had one husband (well managed, predeceased her) and no children. They would have interfered with her social activities and her clean house.

Harl had two wives (Jenny, my grandmother, who died by suicide with a laundry list of reasons and diagnoses, including the fact that her husband brought his mistress home for Sunday dinner, and Freda, the mistress, who brought two children from her first marriage) and three children: my mother, Genevieve Madeline (Gene) - after her grandmothers - by his first wife, and Richard (Dicky) and Minerva (Micky) by his second wife. Although Micky wasn't his, and he probably knew it and respected a solid revenge plot.

Gene had three husbands (divorced, died, predeceased) and one child. Me.

I was raised to consider husbands as pleasant, useful, and often short-lived additions to the family. Is it any wonder I waited until 46 to get married?

But the surprise ending of this history is my own surprise. That husbands are pleasant, useful, and hopefully stick around for a good long time, because I happen to like mine very much.

Brilliant storytelling!
I love your “the history I grew up hearing” - I had never thought of this, but now I realise it’s the same for me. With fewer husbands.
And, congratulations on your own husband. Well chosen!

Thanks. Family stories have different interpretations depending on age, I think.