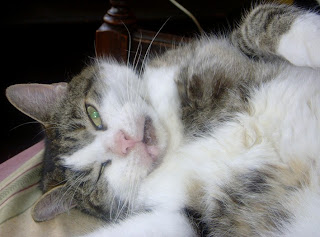 I had so many plans for this weekend.

After a winter of too much winter, it was supposed to be nice on Saturday, and even nicer on Sunday. I was going to do a good bit of sewing (the clog in my brain seems to be clearing and I had a few ideas perking) and I was going too get out back and do the clearing up in the garden that I hadn't finished in the fall.

None of this got done.

Also on Saturday was a trip to the farmer's market, a badly needed haircut (both done), and a stop at a neighborhood rally. Also done.

A little over a month ago, there was a huge apartment fire a few blocks from my house. It happened during the workday, so no one was injured, and most people weren't even home at the time, which was both good and bad, because they were able to rescue nothing. Including their pets. The firemen went in the next day and rescued a bunch of cats, most living and a few dead, and said that was all that they saw.

A local cat rescue group found a few more of the animals from the apartment complex, and had everyone keeping an eye out for others. Last week, one of the missing animals was spotted sitting in the window of her old apartment on the second floor. Trapped. The building had been sealed by the city, and is scheduled for demolition this week.

So the rescue group put out a call and about 150 people showed up yesterday in front of the building (which wasn't even completely gutted by the fire, but is being demolished anyway, because it's easier than repairing it). Turns out it's remarkably easy to stop traffic. We blocked the intersection and waved signs and carried on for an hour or so, and the police, when they showed up, just waved and started diverting traffic. A lot of the tenants were there, because in addition to the animals still trapped inside, quite a few apartments sustained little damage and yet they haven't been allowed back in to retrieve their possessions.

I know there'd have been breaking and entering involved if those had been my cats, but I feel for the other people as well -- losing everything in a fire would be horrible, but what about not losing everything to the fire, but losing it anyway because you aren't allowed back inside?

At the time we weren't sure how much good we did, but a notice came out this afternoon that the PSPCA were allowed into the building this morning for the first time, and were able to trap the kitty who'd been looking out the window, and she's been reunited with her person after a month-long separation. Another cat was sighted but ran away.

Demolition is still scheduled to begin this week, with no word on whether the tenants will be able to get their things. Another protest is scheduled for tomorrow, and a neighborhood lawyer is plannint to file an injunction.

All I know is that when I got home from the rally yesterday, freezing cold and with a scratchy throat, the first thing I did was track down all 10 cats and hug them until they squeaked.

If you have animals, go hug them.
Posted by Karen at 8:47 PM

Frankly, much as I'm attached to some of my stuff, I'd feel utterly foolish if I died in a collapsed building trying to retrieve it. That's a premature version of not taking it with you.
But it's quite something else letting your pets die of starvation/demolition. Almost all of my kitties would have easily escaped the notice of someone who wasn't familiar with their hiding places. That'd definitely call for breaking and entering..

I, for one, think this was a much better use of your time than sewing. And you know how much I value sewing!

What an awful situation for those poor people.

You definitely made the right choice in choosing how to spend your time--and thank you for doing so. I'm with you on the B & E--if my cats or dogs were trapped away from me, there's not much I wouldn't do to get them back.

Oh, those poor kitties and those poor people! My heart would break if I couldn't save my babies. Thank goodness you were there and helped!