Has sewing made me a better cook? 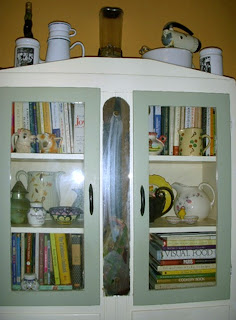 I think it has. I've always loved to sew. Cooking came later, but it came full blown, with the arrival of the Food Network on my cable TV lineup (this was back when the Food Network actually taught cooking, instead of simply broadcasting shows about food).

In the beginning, I was a slave to the recipe (or pattern instructions). As I gained confidence, I would occasionally swap out an ingredient or change the steps (order of constuction) to suit myself.

These days, mostly because of Burda, I've learned to sew without reading the instructions except when I'm stumped, and while I love to read cookbooks for inspiration, I rarely have one open on the counter while I'm cooking.

I've noted the resemblance before, but it really hit home this past Sunday when I made a big batch of lamb stock from some bones I had in the freezer. I threw the bones into my biggest pot with an onion, some celery and a carrot, and let them boil away until the broth looked yummy and the veggies and bones turned gray. I removed the insert with the bones and veggies and proceeded to strain my stock. I couldn't find my funnel so I was using my cone-shaped strainer with some cheesecloth inside to simultaneously strain the stock and pour it into jars.

Somewhere around the fourth jar, I noticed that the cheesecloth must have slipped a little because there were a few flecks in the stock. I stopped, thought about it, and said to myself, "No one will notice, and I'll strain it again before I use it." I tried to go on, and I couldn't. I poured the stock back into the pot, changed the cheesecloth and re-strained it, without flecks. Soon I had 7 jars of stock on my counter, and a realization growing in my head.

A few weeks ago, when I made the Burda spring blouse, I picked out an entire line of stitching that no one would ever see, because I realized that it would make me crazy every time I wore it. It seemed easier to do it right the first time than to be irritated later knowing that I was too lazy to do it right.

Apparently this mindset has now drifted downstairs to the kitchen. I've never been a perfectionist - good enough often is good enough - so it remains to be seen whether I can keep up this level of "doing it right the first time."

What about you? Have you seen any of your sewing habits wandering into your other hobbies or obsessions?
Posted by Karen at 10:17 PM

Yeah, good enough -is- good enough :-). I'd never unpick a hidden seam, unless it was going to affect function somehow. If I thought about it at all later, I'd enjoy the feeling that I was getting away with something. Granted, I now do less that should be unpicked, on the whole. But really, I've learned to be quite comfortable with good enough.

Lately I have been finding myself being meticulous in my sewing. Horrors! If only it would spill over into my housekeeping...

Karen, for the past year I have often thought about the relationship between cooking and sewing. At one time I loved to cook but since I have been on a sewing blitz it is an effort to defrost something or call for take-out. I get enthused about a sewing project and could care less about anything else (household stuff that is) While I certainly understand what you are saying, I would have to say "No," I am not a better cook from sewing! Mimi

Humm, I'm definitely not a better cook because of sewing, but am a better eater, since I tend to grab junk food and eat it while I sew. Does that count?

Just like cooking, I have projects where I am meticulous and then there are the quick and dirty "that'll do" projects....and meals;-)

It's an interesting question...on the one hand, I think that years of experimenting with sewing has made me more willing to consider that there's usually more than one way to do things. But then, I'm definitely more meticulous with my sewing--as long as the food tastes good, I don't care as much if it looks pretty!

I find myself being fussier than I used to be - but I decided it's because my kids are grown and I have the time. When they are younger I was a get-'er done kinda gal. Now I'm more of a perfectionist.