It's been a long, long time coming 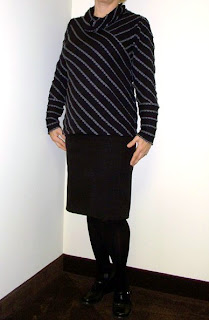 But I finally finished my ruffled sweater!

It's been nearly done it was almost anti-climactic to put it on today, but I'm really happy how it turned out.

My last bright idea, in a project that contained many "bright ideas," was to add the cowl.  Of course I decided to do this after I'd finished the neckline.  So I made a separate, detachable cowl, and decided then that I liked this idea even better - now I can wear it both ways, because obviously no one would ever recognize this sweater, it's so unassuming and unrecognizable.

Sometimes I make my own head hurt.

The cowl is basted at from shoulder to shouldler seam in the back, left loose in the front.  That way I can rearrange it however I want, and, since it is only basted, I can remove it if I change my mind.

The sleeves are still my favorite part. I love the chevron effect, and while it wasn't intentional that the chevrons flow up one sleeve and down another (I think wine might have caused that little bit of inspiration), it works for me.  How can you look at this top and actually say that it shouldn't?

What got me to finish up, finally?  Well, Saturday was PR Day - the official celebration of PatternReview's 10th anniversary, and there was a small get-together in Philadelphia.

Now whether you're a fan of Patternreview, Stitcher's Guild or Burdastyle, their intentions arethe same:  sewing is a pretty solitary obsession, and there's an enormous community out there if only someone could organize it and shove it in our face in a way that makes us recognize what we could have. 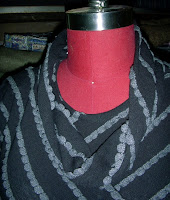 So thank you, Deepika, for Patternreview.  I joined in 2006, oblivious to what the site would add to my sewing (and personal) life within the next 5 years.  Now most of my friends also sew - and some of them even live in the same general vicinity.  I got to see them on Saturday, and a few "locals" I hadn't met before.  It's always good to enlarge the sewing circle, and when I got home, I was so inspired just by a few hours of shopping and lunch that I had to tack on my cowl and hem the sweater. 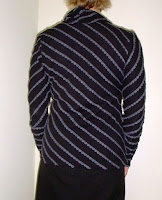 What's that you ask?

A few hours of shopping?

And you want to know if I bought anything?

Photos are forthcoming (most fabric is still in the laundry basket), but I got 2 different colors of a very nice washable linen, one of which was a light grayish blue color that I looked for without success all summer.  The other is a sage-ish green.  I got a flannel print that manages to not look childish or mannish; I think it wants to be a shirt dress for my painfully cold office.  And I got a home dec fabric that I'm absolutely in love with - it's ivory with very cool, neutral wintry tree branches in grays, browns and tans.  I walked in the store, spotted that almost at the back, and went right for it.  It was too expensive, and I didn't care.  So there.
Posted by Karen at 9:50 PM

Your sweater looks gorgeous. I wore my cardigan from this fabric the other day and received many compliments. It is great fabric.

I love your sweater. I'm going to be in Philly later this week (Thursday through Monday) and doing some fabric shopping on Monday. Can you tell me the "must go" places? g

Have a great first married Thanksgiving. :-)

Love the sweater. How is the cowl drafted? Is it just a rectangle? (I fancy adding a cowl to some existing knit dresses so I can wear them with wool jackets otherwise too scratchy.

Love your sweater. When I saw the first photo, I immediately thought about a jacket made by Angela Woolf. Happy Thanksgiving!
C

Love the sweater! Sounds like you had a great Philly meetup--DC was fun, too.

The sweater turned out really great! I wish I'd been able to join the fun on Saturday, I had a Dr appt. I'm sure everyone bought something and had a good time with like-minded people.

I like the idea of a detachable cowl. You do have lots of good ideas.

It is a lovely sweater and I'm so glad that you had a wonderful day shopping with fellow sewing enthusiasts!

It's beautiful - I love your use of lines in this sweater.

That's a very pretty sweater. You'll get a lot of compliments on it, I'm sure.