So Near, and yet So Far 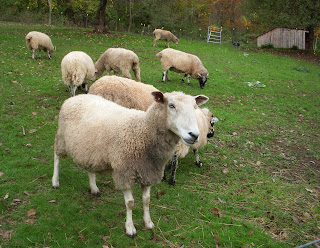 More radio silence. It's gone from cat crisis to aunt crisis, and I will leave you to guess which one is easier to deal with.

My aunt apparently went into the hospital at the same time as Max did on Friday, however, no one thought to let me know about it until Tuesday. Now there's a bit of drama I'll spare everyone, as I can finally now think about it without wanting to smack people. Currently she's in hospice, and not likely to come out, and I'm dealing with closing up and emptying the apartment we moved her into 3 years ago. And she has exercised her family packrat talents to the max - I had her so pared down when she moved in that there was space everywhere, and now all the closets and drawers are overflowing. Again. 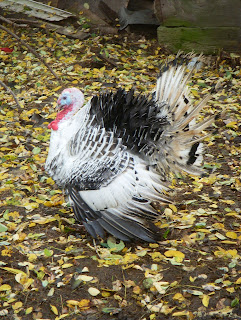 But enough of that. My weekend away, which apparently I was not meant to have but I enjoyed every moment of despite that. I do read more blogs than just sewing blogs, and one of them is Cold Antler Farm. The author is a 30-something originally from suburban PA who had the epiphany that what she really wanted to do when she grew up was be a farmer. So she has herself a small farm in upstate NY with all kinds of livestock, and part of the way she makes ends meet is by hosting workshops at the farm. This was her big yearly two-day affair, called Antlerstock. I wanted to go last year but the timing didn't work out; this year I paid my fee in February and had been waiting impatiently ever since.

Upstate NY was definitely closer to fall than we are in Philly; the locals apologized for the lack of fall color, but to us it was breathtaking. So was the temperature. Saturday it drizzled for most of the day and didn't get above the mid 40s. We were outside the whole time, and even though my boots didn't leak, standing in semi-liquid mud to your ankles makes for some cold feet. Sunday morning it was clear but only about 38. I could see my breath when I went outside in the morning to call home.

In those two days, we got workshops in soap making, home brewing, herbal remedies, making sourdough bread and cheese making.  All of which are less complicated than they look, especially soap (at least once you get over the idea that you're messing with lye). 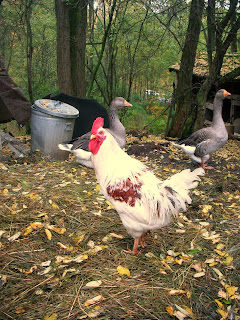 All the cooking workshops were done outside on a propane grill or camp stove, but it all turned out so good that I can only imagine how much better it will be in my kitchen.

Livestock classes were backyard chickens, rabbits for meat and fiber, sheep and wool, and working with draft horses. She has two milk goats but they were off at another farm for breeding, so we got a tour of that farm during our lunch break and got to meet her goats, as well as check out their greenhouses and chicken and duck breeding operations. 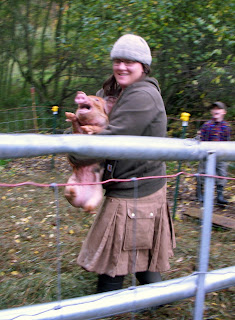 I was also rather impressed with her sheep, especially one ram lamb who followed her around like a fluffy, hooved  puppy.

Oh, and did I mention she has pigs? One of them got delivered while we were there and it escaped shortly thereafter. Probably the unintended highlight of the whole weekend was the pig chase and capture. I can't even describe the sound that little critter made when she grabbed him and returned him to his pen in the barn. 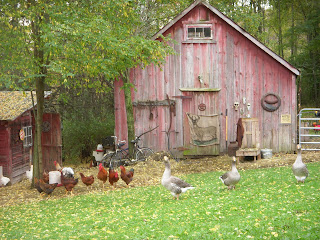 There were also two evening bonfires, a good bit of imbibing and a lot of conversation with like-minded people from all over - local NY and New Englanders to someone all the way from Australia.

My friend and I had a blast and I have a whole lot of new interests to try out this winter when I can't go out and play in my garden. Not to mention that my condition, which the writer/farmer has aptly christened Barnheart, has gotten much worse and I really, really want my own goats now.
Posted by Karen at 8:21 PM

That sounds like a superfun time! I keep meaning to try sourdough bread and just never make the time to get around to it.

Thankfully you had a break from it all.

That's what you need - a piglet.

Karen:
Delurking to say Hang in. I'm glad you had your weekend and sometimes it's good that you commit yourself and go (as it's sometimes easy to talk yourself out of the "breaks" that you need). Sounds super cool! Best wishes with all the family stuff.