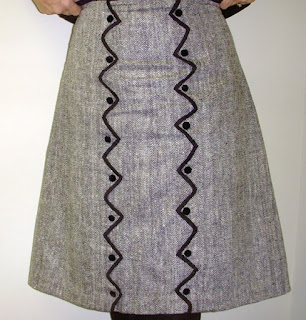 This piece has actually been done for a while now (since June, approximately), but I got derailed in posting photos and a review.  Not to mention that it was too hot to actually wear the skirt I spent so much time on - even the "abbreviated" version that I made.

This is another piece for the 1912 Project, which has not been active lately.  Therefore I'm not pushing on the patterns I still have to complete; I'll get to them when I'm inspired to work on them, which is how we'd generally all prefer to work anyway.

What skill level would someone need to sew this pattern and why?  I would say this would be best for an intermediate sewer simply because of the amount of bias trim and patience required to get a good result.

Were the instructions easy to follow? If not, what needs to be changed? The instructions were good.  I really liked the description of how to construct the scallops and their facing - I had originally imagined it would be sewn right sides together, turned and pressed, and then the bias binding put on, but having them basted wrong sides together with the raw edge being bound made the edge much smoother.  The rest of the instructions were pretty clear, although I omitted the original side opening at the scallops and inserted an invisible zip in the left side seam instead. 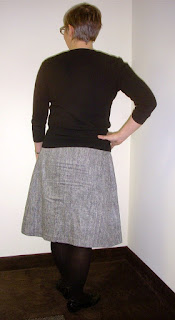 How was the fit/sizing?  Did it correspond to what you thought?  The measurements seem accurate to what's on the pattern.  I tapered all the pieces at the waist just a touch (my waist measurement isn't all that much smaller than the pattern, which I was somehow surprised to discover).  The fit is really good, it drapes well over the hips and hangs very nicely.

Fabric Used - Raw silk in a herringbone pattern; it feels like a very smooth tweed. This has been in stash for at least 10 years, and possibly longer.  I don't want to think about that.

Did you make any pattern alterations? If so, what alterations did you make? Where they fit or design alterations?  Minor alterations to fit at the waist.  I added scallops to both sides, because I just couldn't not do that much bias binding.  I like the look, though I can see where it would be a bit much, depending on fabric.  With my black and ivory herringbone, I think the black binding looks good.  I also added boning at the high waist because I sit most of the day and the skirt would never survive that without the waist getting all wrinkly.  I had 5 pieces of 6" long boning in my workroom, who knows why, so that's what I used.  I made tubing from the leftover muslin, cut it to size and hand-stitched these channels to the inside of the muslin skirt underlining.  I didn't insert the bones until after the facing and been sewn on, then I slipped them into their casings and tacked the facing down so that the bones were enclosed and couldn't work themselves loose.  There is one bone at center back, as the least stressed area, one in each side seam (sewn in along the zipper on the left), and two in the front beneath the scallops.  They're not uncomfortable at all and really help keep the skirt looking like it should.  I also used 14 black velvet buttons to ornament my scallops, since I didn't make them functional.  Just to keep it all looking neat, I hand tacked the points of the scallops to the center of the skirt.  There was a LOT of hand sewing in this skirt that I hadn't intended. 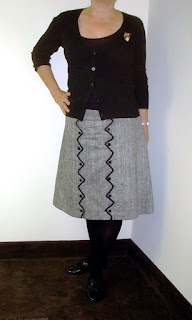 Other notes:  I made a muslin of this skirt so I could get the waist fit and length adjusted.  My guesses on the muslin were good, so I used the muslin pieces to cut my silk.  The silk was a bit drapier than I wanted for such a structured skirt, and I didn't think lining it was the solution, so I used my muslin pieces to underline the silk.  It gave just enough extra weight to the silk that I didn't get any stretching or pulling anywhere.  I used purchased bias binding for this skirt, since I wanted black; if it had been a color or print, I would have made my own.  This took a 3 yard packet of bias and used up most of it.  I pinned and pressed the scallops one at a time, and then hand-sewed them down, catching both sides.  Painstaking, but much nicer and neater than machine sewing would have been.  I also used black seam binding on the hem and put that up by hand; aside from it matching the exterior - all those nice black lines - I just feel that seam binding makes a hem hang better than actually hemming fabric-to-fabric.

** Annoying note.  I took a TON of construction photos while putting this skirt together.  However, that occurred back in June, and I now have no freaking idea what happened to the pictures.  They're not in the camera, they're not on the computer, they're not on Photobucket, they weren't attached to the draft of this post. I hate when I do all that work and then have no idea what happened to it.  And some photos, like the boning, can't easily be reproduced because all that is now hidden by the facings.
Posted by Karen at 11:22 PM

That is one super cute skirt. Nice job!

Lovely, unique and yet so RTW!

This is one of the VPLL styles that I thought would be great to try. It looks great.
I know how you feel about MIA notes:(

Beautiful skirt! I love the details. Sometimes doing things by hand is the best way.

It is a beautiful skirt Karen! and it will never go out of style, very important after all that handwork.

Oh my goodness!! That is just awesome!! I have to make one for myself.

I forgot to post this, but where did you get that skirt pattern? I am dying for it.

Very cute! You must be so bummed about the construction photos. I know how much work they are.

It's a stunning skirt. I love the scallops. I am sorry that you can't find the construction photos. It's would have been interesting to see.

Oooh, Karen! What a great skirt! I'm having a serious case of the sewing envies.

I really like your modernized and more symetrical version of this skirt. I had wondered how they had designed the scallops. Good planning on the zipper, I bet it makes the whole skirt fit and wear better.

Beautiful skirt and love the details.

I'm very late to comment, but I love this skirt. The graphic quality is the perfect touch for an otherwise sober color. It looks vintage and fresh at the same time.