The Cat Who Came to Stay 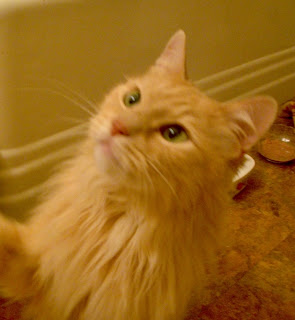 I went out back the other morning to feed the chicken.  I was temping this past week so I was in a rush, trying to remember how to deal with 9:00 - 5:00, and the last thing I wanted was to find the chicken coop in a mess, the food and water containers turned upside down and Bonnie herself in an uproar.  A visit from a raccoon, maybe?  I straightened everything up, lectured her about staying calm, and stood up.

Then I heard a meow.  I thought it was one of mine, calling from the kitchen window, reminding me that they hadn't had their food yet.  Then I heard it again, and it was definitely outside, and closer.  I looked around - no cat in the yard, none in the alleyway.  Where?  I moved away from the coop and found out.

During the heatwave last week, I had set up the patio umbrella over the chicken coop to keep the sun from cooking her, and we hadn't gotten around to taking it down yet.  Lying on the pale green umbrella like it was a hammock, there was a long-haired, pale orange cat.  Who apparently had scared the crap out of my chicken and was now yelling at me in that demanding "where's the food?" tone. 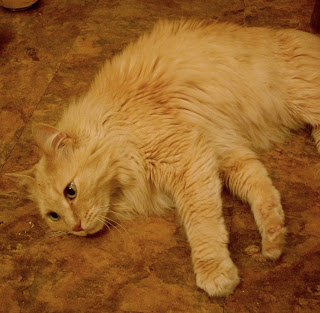 So I went in, grabbed a can of Lily's food and opened it.  Which Lily did not appreciate.  When I went back outside, I couldn't find the cat.  Turns out, when I came out, she went in, and she was sitting patiently in the shed, waiting for food.  I brought back out, and went in to get some water.  She followed.  I put her out again, and when I opened the door with the water . . . well, you get the picture.

To top it off, I thought she was my neighbor's cat who had gotten their screen open before and tried to climb down two stories of brick wall.  I brought that cat in until her person got home, and I was pretty sure that this was the same cat - big, fluffy, light orange and very vocal.  I wasn't sure, but just in case, I thought I should bring the cat in.

Of course I hear from my neighbor later that her cat is sleeping in the living room.  Our housemate reminds me that neighbor cat is a polydactyl and this cat, while having very large, fluffy feet, has only the standard number of toes. 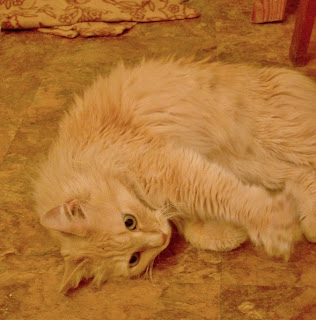 Toes which are now residing in the guest bathroom while I figure out what to do with her.  This is the first time our cat numbers have been in single digits in probably 8 years, and I was okay with that.  Now what?  I thought I had a friend who could take her, her cat had just died and she wasn't going to get a new one until she got home from vacation.  I reached her on her trip and it turns out her daughter had just brought home a new cat for her, so that option is out.

I'll keep you updated, but I get the feeling that the fair Marigold may have found her new home, whether or not we agree with her.
Posted by Karen at 9:29 PM

She is gorgeous! Looks like she's at your house to stay. Cats know these things.

Karen, I'm happy for you. The cats know a good person when they see one (or need one!).

I think she has picked you as her human. She's probably been planning this "adoption."

Oh Marigold is beautiful and since you've given her a name, well....

How is life these days? Hope all is well. g

Marigold has chosen you as her human!
And she's chosen a great home!

She definitely looks lIke a keeper to me and she could not have picked a better home. Love the name you picked for her. Is Mario hooked yet?

Dude... You've been adopted! How could you resist that little yellow face??! #HasASeriousSoftSpotForYellowKitties