A Day at Downton Abbey - Part 4 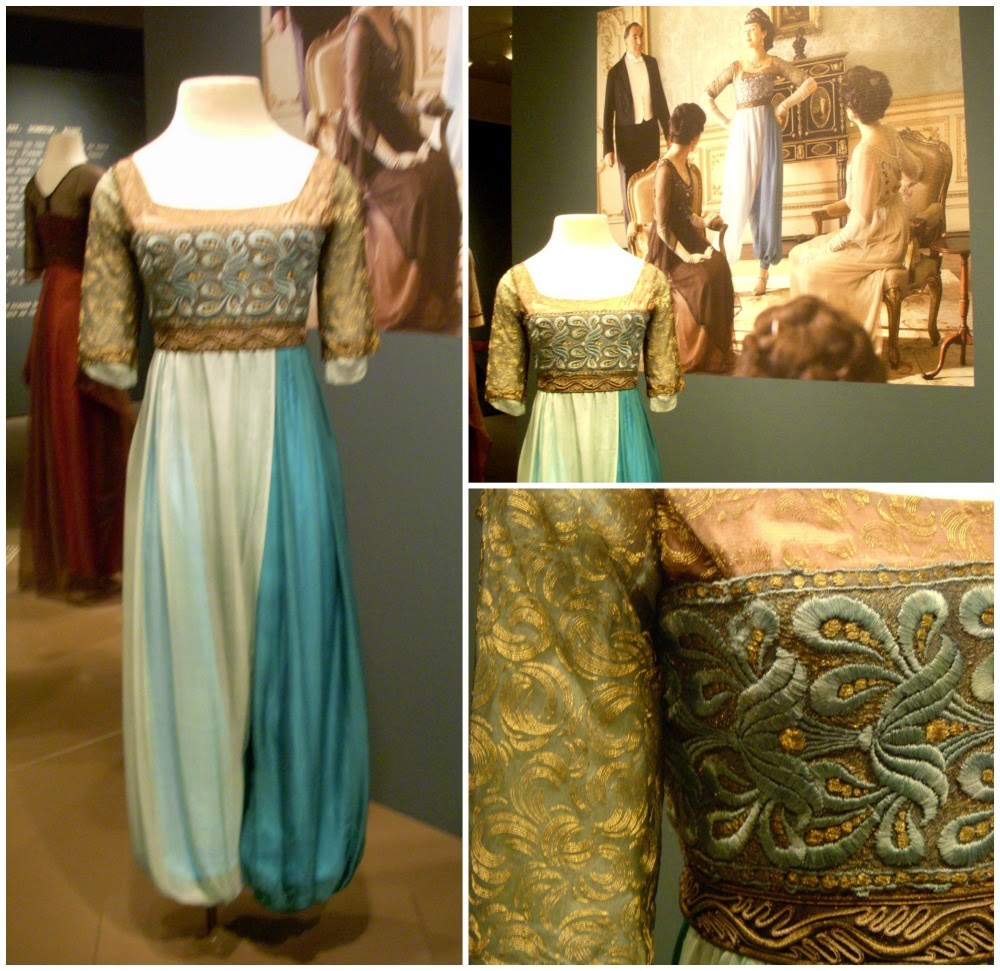 And now for some of the memorable bits.

Lady Sybil's harem pants, anyone?  Considering how much fuss was made over this outfit by the character, and the family (and Branson's) reaction, it got remarkably little screen time.  I wonder if this was due to the fact that the vintage portions of the costume were disintegrating as Sybil wore them.

This costume was far more impressive to me (again) in person, because I could get so close to the embroidered bodice that I practically left nose prints on it.  I do wish they'd included the headpiece she wore with it, but I guess because the mannequins didn't have heads, they didn't bother. 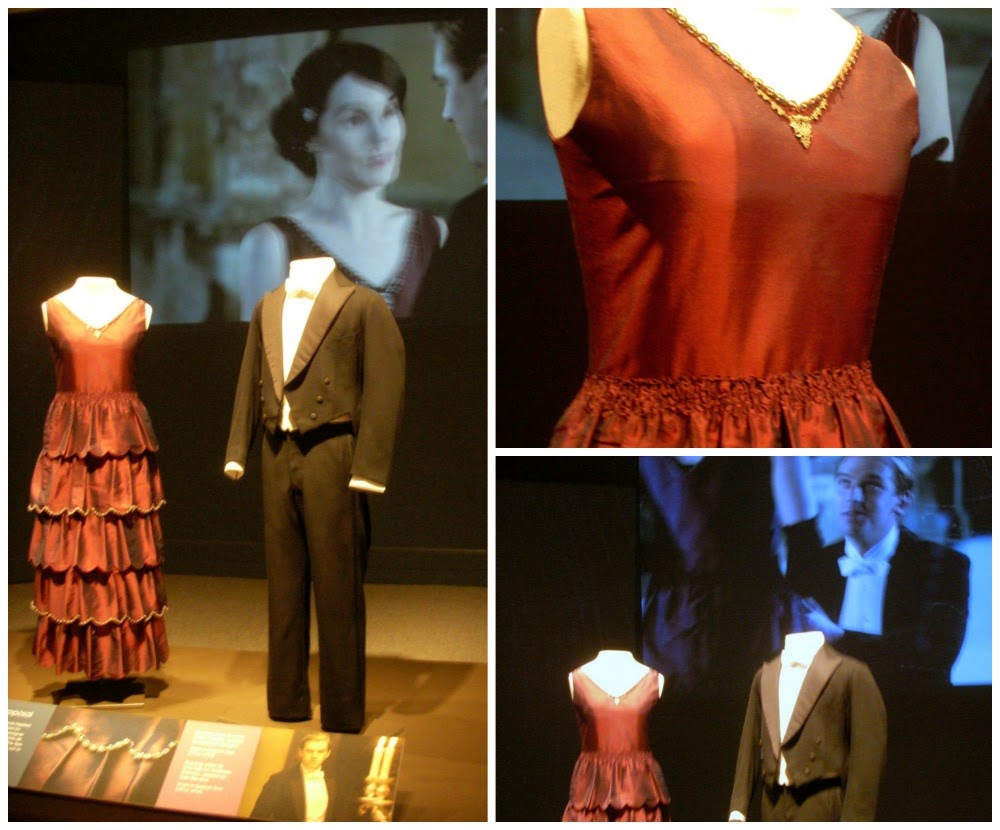 Which wasn't really all that notable.  The exhibit card said that the dress was deliberately plain, so as not to detract from the drama of the scene, but really, what would have detracted from Mary and Matthew finally getting their act together?

The color was perfect of course -- Mary looks like she's made out of ivory, and she's so slender that anything looks good -- but beyond that, we were fairly unimpressed.  I didn't like the ruffles on the skirt, and that only every other ruffle had beading.  The small bit of beading at the neck also looked more significant on camera.  And really, what's the gather-y thing around the middle?  Good thing she inherited Scarlett O'Hara's 18-inch waist. I guess that's why they're the professionals, though.  Because I really can't remember much about the dress in the scene, other than the color, and how good she looked, and the snow falling.

Oh, the snow.  Behind the Mary-and-Matthew tableau, they have the engagement scene on a video loop, with the music playing and snowflakes projected onto the walls.  It's a nice touch.

And then there's Edith.  Not a lot of  her earlier clothes made it into the exhibit, and most of her interesting 20s clothes are probably in England, since they're filming.  But they had her wedding gown.
The wedding gown.  The beading on that made my eyes water. 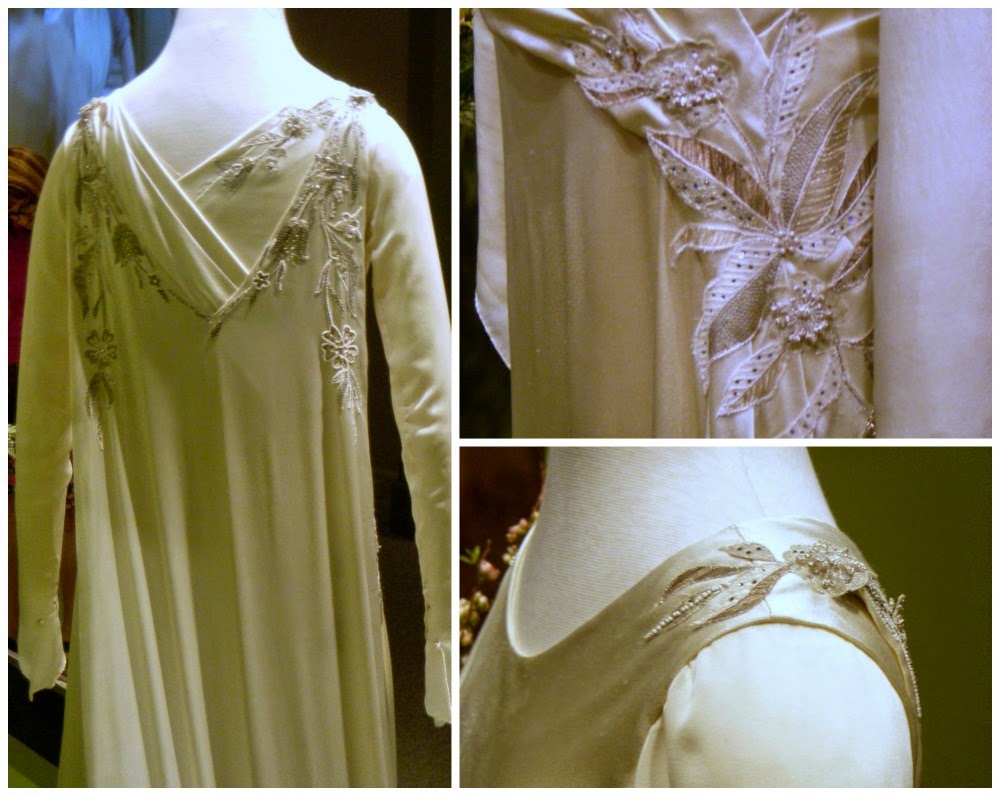 We all remember Mary coming down the stairs at Downton, and Lord Grantham and Carson bursting their buttons with pride, but that dress looked good because Mary was wearing it; I don't think it was all that special otherwise.  Edith's dress is an amazing piece of clothing.

The green backdrop didn't do the satin here any favors; it really caught the color in the photos.  It's probably most accurately depicted in the train photograph above, which also shows the delicious beading to advantage.

In true 20s fashion, the dress doesn't look that spectacular on the mannequin, but remember how it looked on Edith?  Satin like that needs a body in it to really work.

The beading on the gown was just amazing, and there was so much of it.  The cluster of flowers on the hip, the leaves on the shoulder, the beautiful work on the back -- I don't even remember seeing the back of the gown on TV -- and the train.  Bow down to that train, because it is worthy.

Believe it or not, I still have more photos.  I haven't gotten to some of Cora's clothes, or any of Martha's, and can we talk about Downton and leave out the Dowager Countess in all her Edwardian splendor?

Let me know if you're sick of it yet; otherwise, more soon.

Loving these! Thanks for sharing.

Sick of it? I absolutely love it. Wish I could go to the exhibit myself. Lucky you.

Noooo! Don't stop, please! I'm so loving these posts, thank you for sharing the photos AND your thoughts on the exhibit. I believe there was only one Canadian city (Toronto, of course) that the exhibit visited. I couldn't make it. You are so lucky you went and we're so lucky that you're taking the time to share it. Thank you!

NO! We were going to go up to Winterthur to see this exhibit, but discovered it is coming to Vanderbilt's Biltmore House in Asheville. So we are going to see it there. The exhibit is going to be staged in many of the 250 rooms. This gives me a heads up as to what to watch out for. Thank you.
PS--I love your blog and writing. Always interesting and creative!! And I like Bonnie!
Renita

Yes from me too, and I've never watched Downton. Looks like a great exhibit, thanks for posting these pics.

Not sick of it at all! Keep the pictures coming!

I love reading these posts about the Downton clothing!