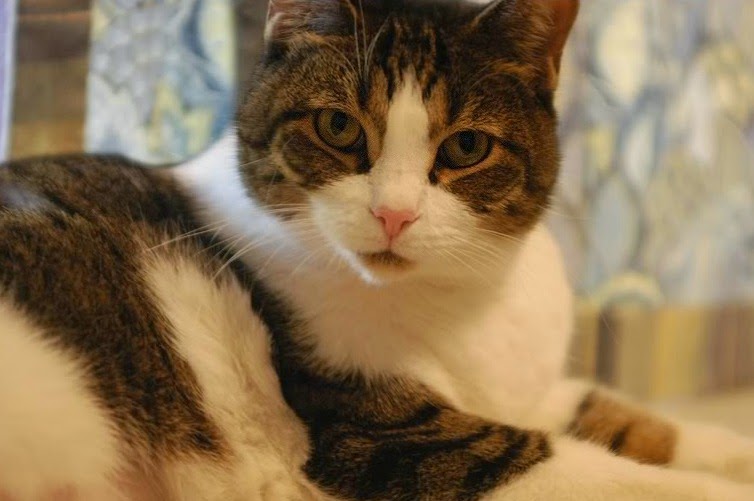 We lost Archie this evening.

I knew it was coming, but it's still hard.

I put him on his standard respiratory infection antibiotics, and for two days, he seemed a bit better.  His eyes stopped running, at least, but he was still sluggish and not particularly interested in food.  For a cat who was 25 pounds at his peak, that was worrying.

I'm off work tomorrow, so I decided today that I would see how he looked in the morning, and if it seemed that things were truly worse, I would take him down to the University of Penn's veterinary emergency room and let him go peacefully.

Then I came home from work, and the decision was much easier.  He'd moved since I left in the morning, but he'd pulled down a plastic bag to lie on, and instead of getting up to go to the litterbox, he'd messed on the bag, and was lying in it.  That's not the behavior of a cat who's going to recover anytime soon.

I wrapped him in a towel, popped him in a carrier, and headed out.  The hospital is only 6 blocks away, and it was easier to walk -- Penn's move-in has started and there are street closures between here and there.  That ruled out taking a cab, and Mario wasn't home yet, so the car wasn't available.  I ran into Mario, however, halfway to the hospital, so we ended up saying goodbye to Arch together.

The vet who looked him over agreed that there was something seriously amiss, and also agreed (as my regular vet might not have) that my choice was a totally reasonable one considering the alternative was putting a sick, 14 year old cat through tests that might well tax what little strength he had left.

Archie didn't look like much on the table, wrapped in a different towel to cover the stickiness, with an IV in his arm for the needles.

I prefer to remember him as the tiny kitten I brought home one day in November, 2001, cold and wet and having been rescued from a bunch of rock-throwing kids, zipped safely into my leather jacket next to my heart.
Posted by Karen at 11:16 PM

Awww, Karen, I'm sorry to hear Archie's crossed the rainbow bridge. Peace to you and Mario.

Sorry to read about your loss. It sounds like Archer was lucky that you rescued and gave him a great home and life.

So sorry to hear about Archie...My heart goes out to you Karen

Sorry for your loss. I'm glad Mario got to say bye too.

I'm so sorry for your loss. It's always difficult to say goodbye

You made a loving, selfless decision....but it's always hard. So sorry for your loss.

So sorry--it just hurts so dang much, doesn't it? RIP Archie.

So sorry for your loss.

Your beloved Archie died knowing he was loved with his 'parents' by his side. You gave to Archie what every kitty wants - a loving home. He'll be with you in your memory forever. Goodbye Archie

I'm so sorry for your loss. I know your heart is crushed. Just remember rainbow bridge. Hugs.

Awww...Karen, I am so sorry to read this! Glad you and Mario were able to say good bye.

This brought tears to my eyes as I've been their done that a few times myself. (had up to 17 fuzzy kids at one time.) Just know we all feel your pain. Hang in there.
Lynnelle

I was so sad to read about Archie. It's very hard to have to take a cat to the vet, even when they are elderly.

Farewell, Archie. You brought a lot of joy to your people, and you will be missed.

I'm so sorry for your loss, Archie seemed such a sweetheart... I'm sure you gave him the best possible time in this world

How very sad. I am sorry for your loss.