How Bonnie got her groove back 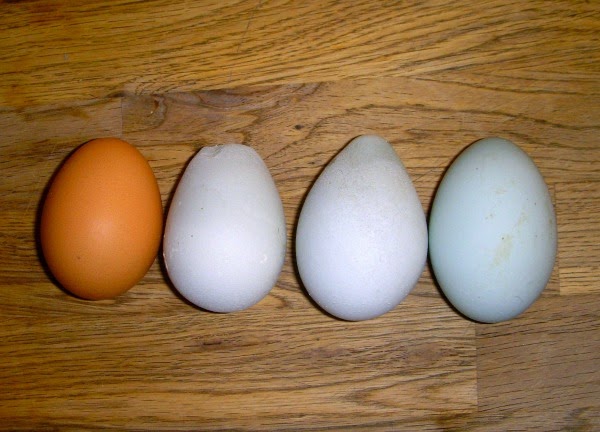 You haven't heard a lot about Bonnie lately because there's not bee a lot to talk about.

She molted late this year, and only this weekend did she start laying again.

Molting is a strange thing.  She seems to completely lose her urge or instinct to lay, which is good I suppose, since all of her energy -- and all of her protein intake -- is put toward growing new feathers.  (I hadn't realized until I got chickens that feathers are mostly made out of protein, and that if a bird is trying to grow feathers, she can't lay eggs at the same time).

Bonnie didn't start losing her feathers until after Thanksgiving, so she was basically chicken skin and pinfeathers all the way through Christmas, and through all the really cold weather we had.  She didn't come down out of the roost except to eat and drink, and she did that with an attitude.

But Sunday when I checked on her, there was a blue egg in the nest box -- the first one pictured.  Monday produced the second egg, and today was the third.

For contrast, I've included a large egg from the farmer's market on Saturday.  Even the first egg, which is dented on top but solid, is bigger.  The second egg has a serious point and by egg three, she seems to have gotten back into her stride -- it's more blue, it's the right shape.  And it's huge.

She's never taken a 2 1/2 month hiatus before, and I admit to thinking random thoughts of chicken stew in the crockpot, but she's redeemed herself -- at least for now.

Breakfast for dinner tonight.
Posted by Karen at 11:25 AM

the older chickens get, the larger the eggs that they lay, compared to the size of the eggs they layed as a younger hen, and they gradually start laying fewer of them in a week. At least that has been my experience