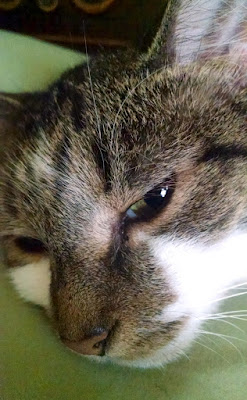 Where to start?  Well, first of all, there are roses blooming in my front yard.  There are tomatoes turning red in the back yard.  The outsides of the windows are running with moisture because it's colder indoors than out.

There's doing a final Christmas show and not selling a single pair of mittens because the shoppers were in shorts and flipflops.  In December.

Then, there are cats.  What is more likely on a holiday weekend than a vet emergency?

Last Thursday, I picked Annie up and thought I felt something under her arm.  I poked around and couldn't feel it, and decided I was imagining things.  The next day, I felt it again, and it stayed found.  So I called my regular vet, who is a good distance away from the house.  She had no open appointments that I could get to before the holiday, and I was afraid to let this wait.  I tried another vet; they were already on break.

There's a vet nearby who I've never gone to.  Dog people love him; cat people do not.  I decided, since he's four blocks away, that it was time to make my own evaluation.  He had an appointment for Monday morning, and I walked Annie down in her carrier to get her checked.

The vet is brusque, no-nonsense, no bedside manner whatsoever, but that's okay.  I know I can tend that way myself if I'm busy, and I don't hold it against a provider so long as they do good work.  He examined Annie, felt the lump and gave me my options: I could have him take fluid from the lump, pay for that and have it come back from the lab as malignant, and then schedule a surgery to take it out, or I could just take it out.  The lump, he said, is probably malignant (breast cancer is common in cats her age).  If it's not, leaving it there increases the chances that it will become malignant over time.  Taking it out, if it hasn't spread anywhere else, will give her a very good chance of dying of old age before the cancer returns.

I voted for removal.  We discussed whether or not to do it before Christmas - he was leaving for his own vacation on Wednesday, but he had time to do it on Tuesday.  It was either that, or wait until the Monday after to have it done.  He thought it should be done sooner, but the risk was that if there were any complications, he wouldn't be around.  I thought the risk was letting that thing grow for another week; I have an emergency vet hospital nearby if something unlikely happened post-surgery. 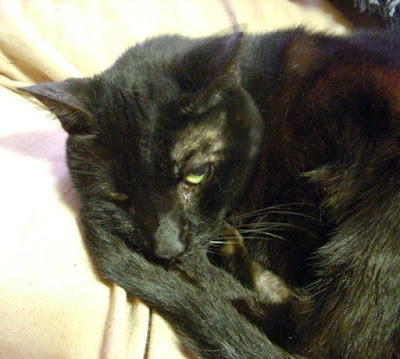 So Tuesday he did the operation.  I picked her up around 4:00 p.m., and attempted to confine her to the bathroom.  She staggered out of her carrier, stoned as a cat can be, fell into her water bowl and then immediately made a break for the wider world.  She's got pain killers and antibiotics, both of which the vet said were optional; he's one of those rare vets who assumes I know my cat and how she's feeling.  (And he normally doesn't give antibiotics after what he calls a minor surgery; these were a just-in-case since he wouldn't be around).

Well, just-in-case is a good thing, because Lily, not to be outdone by her younger sister, decided to brew up her yearly urinary tract infection a little early.  Same issue: regular vet had no appointments, wouldn't call in a prescription over the phone because it had been 13 months since they'd seen her.  Emergency vet hospital declined to prescribe antibiotics because the doctor who treated Lily last time was no longer there, and it would have been her call.  Two friends who work in vet hospitals and who have been able to score the occasional antibiotic before were already on break.

I looked online and the medication Annie was given is also prescribed for bacterial UTIs, so Lily and Annie are sharing the bright pink, cherry flavored antibiotics.  I got a look at Annie's incision this a.m. and it looks amazing - only a thin, dark-red line under her arm.  So she's getting one dose a day and Lily is getting two, and Lil has already started to act more like herself and use the litterbox without discomfort.

Ah, Christmas.  What would you be without three things piling on at once and making me want to crawl under the covers (with wine), forget about cooking dinner, forget about dinner with the in-laws the next day, forget about everything until the new year.

Whatever your holiday (or lack thereof), I wish you all health, happiness and sanity (sanity being as rare in the festive season as cookies are ubiquitous).

And Happy Holidays to you too!

Merry Christmas! Hope the cats continue to improve and you get to have the wine in or out of bed!

Had to jump in to say - it's happened to us! Love the pets, but...Hope you have a great holiday!

Know that feeling, Stop the world and let me off til holidays are over. No animal emergency this year, but did have our brick mailbox murdered by a teenager in an SUV with no alcohol involved. Broke the brick and mortar mailbox into three big pieces with miscellaneous loose brick all over the road. Flipped the SUV and walked away without a scratch. Now waiting to hear from his insurance on building us a new mailbox. It's always something as Gilda Radner would say..................

I live in a small town, with limited access to vets most of the time, so I really empathize with trying to find someone in an emergency. We have an elderly doxie, who is fairly healthy, but when she needs help, she needs it NOW. Glad your kitties are doing better.

Wishing you all the best for the new year! I don't comment often, but I always enjoy your blog and am very inspired by your journey.