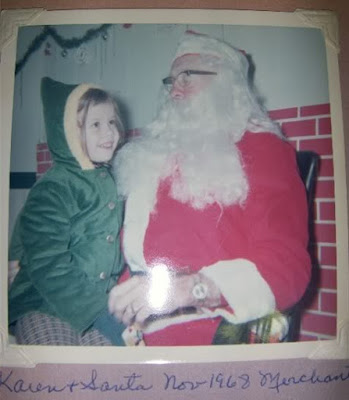 Christmas, 1968.  This was the year that, while I was listing every Barbie in the Sears Wishbook that needed to come home with me, I also managed to twist my mitten in Santa's beard, so that when I got up, his beard came with me.

There is no photographic evidence of my crime against the holiday, because my mom fell down laughing and nearly wet her pants. (I nearly wet mine, too, but it was fear of getting in trouble -- should have known better with my mom).

And I knew it wasn't Santa.  Mom enlightened me early that the real Santa didn't leave the North Pole until Christmas Eve; all the Santas I saw on street corners and in stores were actually his helpers, who were hired because they looked like him and could talk to children and then report back.

Mom was good, I'll give her that. She even hung bells up outside the house one year and pulled a string through the window so that I would hear him fly over after I'd gone to bed.
Posted by Karen at 5:14 PM

What a sweet story. Your mother loves to know that you remember the effort she made that year,

What I love most is how adorable you are, and the shining look of happiness and trust in your eyes.

I bet there was lots of laughter all around when you twisted off Santa's beard. Great story!

Thanks for the laugh! Wishing you all the best in the new year!