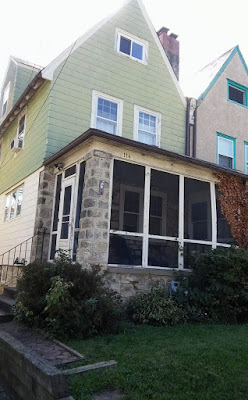 Possibly a little too quickly.

You all know we're looking to move.  We've even figured out where.  But we were thinking about starting the process after the new year -- that's why, among other reasons, we turned away from that large house in the burbs that I talked about before.

And then.  I jumped the gun a bit.

I like looking at real estate ads, the same way I used to troll want ads, even when I was happy in my job.  It's just like going to Ikea, looking at those perfect little rooms and thinking, "Who would I be if I lived here?"  The imagining is always fun.

There were a few interesting houses online, and I visited the listings fairly often.  Then, at a craft show, a friend mentioned that her partner was a realtor covering that area.  Well, it seemed only polite to call and ask to see a few of those houses -- we didn't have to buy them, after all.  It was just like a trip to Ikea, trying them on for size, seeing who we'd be in those spaces.

One of the houses I liked was already empty, its walls painted in colors I could live with, its hardwood floors gleaming with fresh polyurethane, eliciting an almost-inappropriate response in my old house loving heart.  We asked to see that one.

When the realtor texted, setting up the time to meet him, I thought he'd mis-typed the house number.  I'll meet you at 114, he wrote.  I texted back, Don't you mean 115?

No, he said.  We'll see that one too, but the house across the street is also for sale and a better price.

We saw 114, and I realized pretty quickly that I'd looked at the listing and dismissed it because of the godawful pictures, which showed not one good feature and every bad one.  The house had many of the features on my wish list: screened porch, working fireplace, dry basement, replacement windows, three bedrooms, reasonable amounts of storage, a garage, a back yard.  It had a few extras I wasn't anticipating: a built-in cedar closet in the small attic, original built-in kitchen cabinets, aslate roof.  It had a few things I disliked: wallpaper in a few areas, a dingy bathroom, white-painted woodwork everywhere, a leak in the porch roof that damaged part of the living room wall.

We looked at 115, directly across the street.  The colors were good.  The floors were gorgeous.  The kitchen was similar to 114, but smaller.  The  yard was bigger, but less private.  There wasn't much left to do, and it was $40,000 more.

Guess what we did?

We're still in the loan/paperwork/agonizing stage, so (much) more later.  And the move still won't be until well after the new year, so maybe I'm not that far off schedule after all.

I'm still thinking about what I heard at last week's Penn Women's Conference. The other day, they announced they would be releasing videos of some of the keynote speakers - though not Michelle Obama, unfortunately.

Yesterday they released this video of Carla Harris, the first speaker of the day. She spoke at about 8:30 am, to approximately 12,000 slightly caffeine-deprived women, and she was better than a shot of Red Bull.

The speech is her letter to her 25 year old self, but I believe it's something every woman needs to hear, no matter her age, employment, whatever. 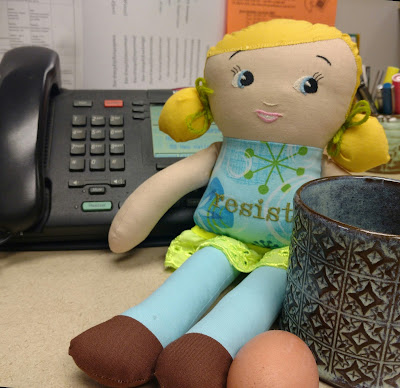 This doll sits next to my phone at the office.

She reminds me, three days a week, that I need to pick up that phone and annoy contact my elected representatives.

Have you called your senator today?
Posted by Karen at 2:50 PM 6 comments: 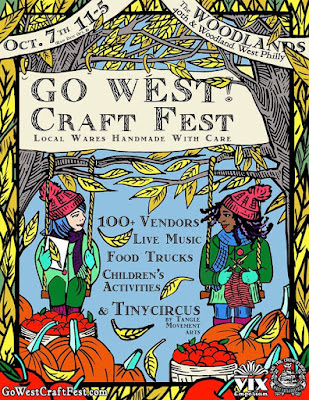 Every year I book too many fall shows, and every year, I'm surprised at how many shows I've booked.

I had one Friday evening, 9/29.  Then an all-day show on Saturday, 9/30.  Then a day to recover, work on Monday, women's conference Tuesday, work on Wednesday (with a lovely event hangover -- too much stimulation, not enough sleep), Thursday (today) to get done all the things that should have occurred sooner, work and a theater evening on Friday, and two more shows on Saturday and Sunday.

Thankfully after that I had the sense to give myself a break to regroup and restock until Saturday, 10/28, and then it's the slippery slope to Christmas.

Every year I say I'm not going to do this to myself, and every year I do.  At what point do I just realize that this is what the last quarter of the year is going to be like, accept it, and get on with things?  (I mean, I do -- that's exactly what I do, but maybe it's the same as birth -- after the holidays, I forget the exhaustion and stress because I have such a lovely result, and because I forget, I do it all over again and find myself in the same fix.)

Tuesday is one of my days to work at home.  In addition to everything I can get done, there's also what I don't have to do -- get up early, get dressed like a grownup, take public transportation downtown and deal with people.

All of which I did yesterday, willingly and with a huge smile on my face all day long.

Yesterday was the Pennsylvania Conference for Women at the Convention Center, and Michelle Obama was the keynote speaker.  That was all I had to hear back in July, when one of the partners at the office where I work part-time was trying to sell tickets to the two tables the firm had purchased.  When I heard the ticket price - $175 - I hesitated for a moment, but honestly, when I am ever going to get the opportunity to hear Michelle Obama speak, except on television, at pretty much any price?

Add to it an entire day of other speakers, workshops, lunch, networking, wine and who-knew-what-else, and I ended up convincing myself it was a bargain.

So there I was, at the Convention Center from 8:00 a.m. until 4:30 p.m., surrounded by TWELVE THOUSAND women and a few slightly cowed men.  And it was fabulous.  Motivating, inspiring, fun.

The morning session (post-coffee and pre-workshop) was Carla Harris, Shonda Rhimes and Shawn Achor.  I really only knew Shonda (who doesn't?), but Carla Harris was fantastic.  Picture Oprah on Red Bull, and you have the energy level.

Two breakout sessions in between, and then a fairly mediocre box lunch, but with Brene Brown, Kathy Sledge leading an enormous group sing-and-dance-along of "We are Family," and then an hour plus conversation between Shonda and Michelle Obama.  Which was amazing.

Originally it was just announced that Michelle would be keynoting, and a few people were initially upset that it was turned into the conversation format, but I loved it.  Even though I'm sure they went over points of it ahead of time, I thought it really humanized both women, showed them as the tough, intelligent, amazing women that they are.  One small sample here, a Twitter link, but the only place I could find it.

And it didn't hurt that President Obama showed up on videotape at the end to wish her a happy anniversary.  You could hear the collective "Awwww" from thousands of women as we all melted just a bit.  Honestly, I think everyone there would like their partner to say those words, in that tone of voice, with that little embarrassment.  Not much of an ask, right?
Posted by Karen at 8:42 PM 5 comments: