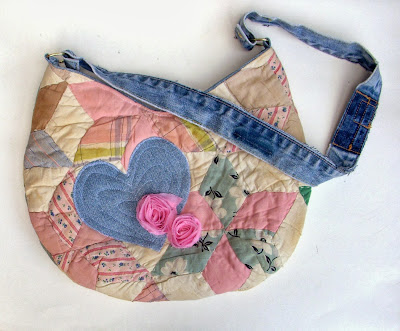 So this is an Etsy shop/craft show piece, but I was so pleased with it I had to share it over here as well.

I got my hands on a vintage quilt recently, with the intent of making a few stockings out of it.  There was significant damage to some portions of the quilt, but when I spread it out, I found quite a few areas with no damage at all, or just minimal discoloration that could be covered by something . . .

I made a similar bag a while back from some quilt scraps I'd gotten at a sidewalk sale, but I'm even happier with this one.  The colors are really fresh considering the quilt's age (I think it's 1930s - 1940s by the prints and some of the damage), and the batting is still fluffy.  When I cut into the quilt, I could see that the batting was wool, and uneven in areas, so it may have come straight from the sheep, who knows?  I know Depression-era housewives certainly didn't head off to their local JoAnn's to pick up batting-in-a-bag. 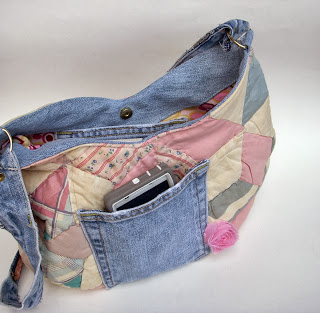 The bag is made from the quilt, with two pockets from a pair of retired jeans, the waistband from the same pair of jeans, and a bit from the leg to make the inside panel.  Pink cotton print lining, a few pink flowers and it's ready for a new life.

Listing can be found here.
Posted by Karen at 1:18 PM No comments:

Fun at the roller derby 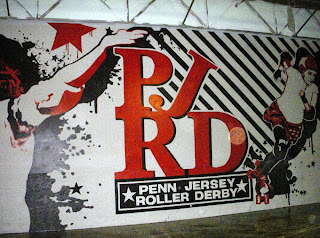 Yesterday was the season opener at the Penn Jersey Roller Derby - something which, until recently, I didn't even know Philadelphia had.

I also didn't know they had craft vendors, but they do.  Not a lot, but I think it's a recent development since they've been working on the warehouse where the roller derby is held.

Now I watched roller derby as a kid (it came on right before wrestling), but I never understood the rules. 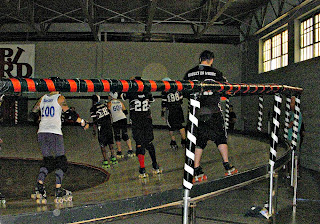 I still don't, but I still like watching it.

Philly's roller derby also has something I didn't know existed - mixed teams.  There are the standard teams made up of all women, but there were also mixed male/female teams, which was fun to watch.  I think the women kicked more butt than the guys, actually.

My favorite part is the names -- Swiss Mischief, Misfortune Cookie, Beater Griffin . . . I think my favorite was the guy who called himself "General Tso Fine."  I give extra points for clever, what can I say? 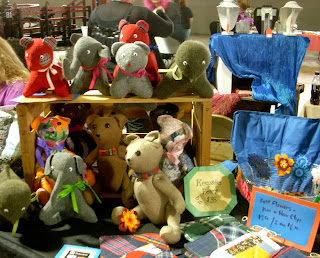 On the actual crafting front, it wasn't a fabulous day -- only four items sold, but I had fun, I gave out a lot of business cards and I met another Philly crafter who I've seen at several shows.  I think I'll give the roller derby another shot.  My October is pretty booked, but there's a November game which fits the calendar.  And it's on that slippery slope to Christmas, so here's hoping!

It'll be here before we know it 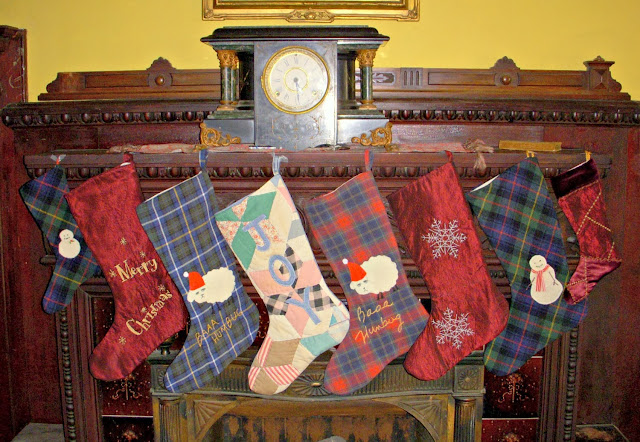 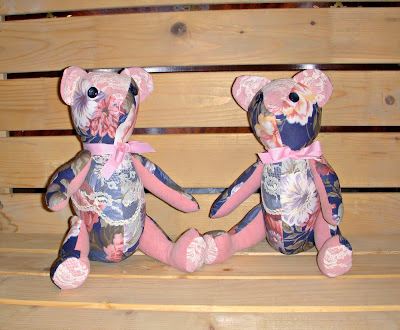 These are the bears I finished last week during my panic-induced sewing binge.

I wanted something a little different this time.  The tweed bears are my personal favorites, but a lot of people have requested "girlier" fabrics.  I dare anyone to tell me these aren't girly enough.

The blue cabbage rose print was actually my living room curtains back in the 1990s, when questionable, oversized prints ruled the world, and often our wardrobes.  The pink linen accent fabric was a skirt, and I believe the lace might have actually been the sheers that hung under the rose print.  It would make sense; they were all wadded into the same box together. 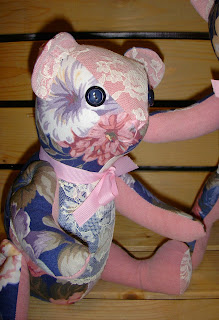 There are four of these bears, listed here.

Another week, another panic.  Now I'm onto Christmas, and the workroom looks like Santa's elves are using substances not approved by Santa.  (Does wine count?)
Posted by Karen at 9:16 AM No comments: 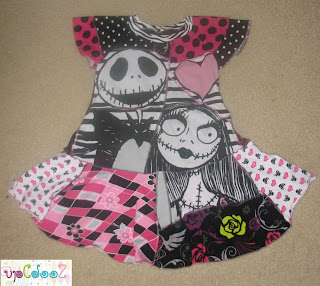 Friday with Friends returns with a feature in the realm of fabric:  the team of Camille and Susan Thornton, upcyclers extraordinare and the talented hands behind the Etsy shop UpCDooz.

The UpCDooz shop is a member of the Upcycled Clothing 'N Things and RecycleParty teams, both of which provide me with frequent support and inspiration.

While my upcycling tends toward taking things completely apart and remaking the fabrics into something else, Camille and Susan often take an existing item and upcycle it into something better than it was before, which is, I believe, the true definition of that slightly annoying word anyway.  (Upcycling: it sounds a little twee sometimes, but people think of recycling as something you put out on the sidewalk with the trash, so I'll use the twee word.  I'm even getting used to it). 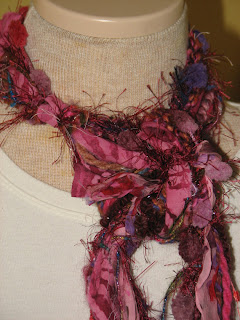 Their Etsy shop is full of fun pieces, but some of my favorites are their custom dresses, one of which I've pictured here.  This particular piece is no longer available, but you could get them to make up something similar, or check out the shop for some fun accessories and women's pieces as well.

Their shop slogan is:  "Altered upcycled clothing for the artfully dressed woman."

I think that pretty well covers it, don't you?

Where to Find Me

For anyone interested in the schedule of my crafty endeavors (and it's quite a hefty one - I may be out of my mind, but that's for another post on another day), there's a new page on the blog, or you can follow the link.
Posted by Karen at 10:02 PM 3 comments:

For anyone interested in my craft show schedule, there's a new page at the top of the blog, or follow the link.
Posted by Karen at 6:53 PM No comments:

A good day at the craft fest 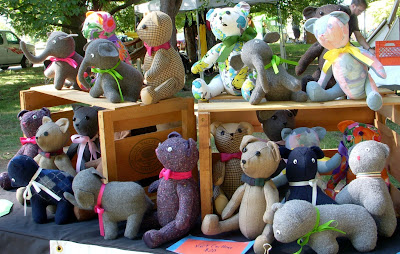 So the September edition of the Go West Craft Fest is now history, and a very good history it is.

Yesterday was a great day -- gorgeous weather, sunny and in the 70s, definitely the craft gods making up for the biblical floods of my last show -- and absolutely the kind of weather that brings people out to walk around and spend money.

I always go into a show hoping that one thing will be a huge seller, so I know how to narrow my focus and make less of a variety of things.  That didn't happen. 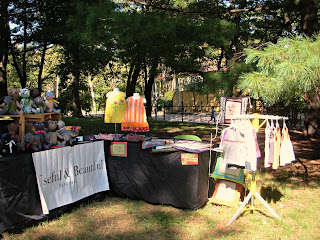 I sold 2 bears, 4 knit critters, a couple of toddler dresses, a couple of embroidered pillow covers and some other bits and pieces.  No potholders this time, and none of the small cosmetic-type bags.  I didn't take my new bag series, thinking that the $50 range might be a bit much for an outdoor event.

While I was there yesterday, I got handed a couple of applications for upcoming events.  I'm debating which ones I want to apply for (other than all of them; I'm beginning to enjoy the craft show circuit, but I'm going to need more inventory).

I also start a six week temp assignment next week, which will somewhat interrupt my inventory building.  I'll be working with one of my best friends while her secretary is out recovering from surgery.  My friend is well acquainted with my plans and told her office that she had the perfect temp -- but I was only available three days a week because I had other commitments.  I'm actually thinking this might be a good thing; I'll spend Monday, Tuesday and Thursday thinking of all the things I would rather be doing, and Wednesday and Friday doing them. 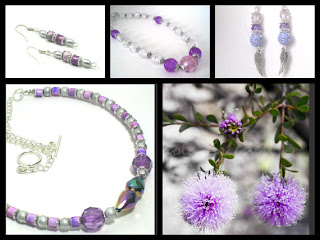 I wonder if I am so attracted to jewelry because it's something I don't make?  It's like my attraction to knitted and crocheted items - I don't make it, most of the techniques involved in the making of it mystify me, and I fear stashing another material.  Me with a yarn stash would NOT be a good thing.  Or a bead stash, for that matter.

So this week's Friday friend is a virtual friend, Cindy Humphrey, who is the captain of my favorite team on Etsy, the Upcycled Clothing 'N Things Team.  Obviously, there's more than upcycled clothing happening here -- Cindy can turn her hand to any kind of jewelry, but it's almost all upcycled from something else. 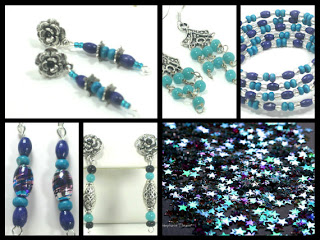 One of my favorite things in browsing her shop is the way she's inspired -- you can see from the two photo collages I borrowed from her for this post that she makes a group of pieces inspired by a photograph that attracted her.  Generally, as in the photo above, she's inspired by nature.

I love the lavender pieces, though the blue ones at right run a close second.

If you like her style, check out her shop -- I know she's putting some beautiful autumn-colored pieces in there this weekend!
Posted by Karen at 9:42 PM No comments:

This is where I'll be tomorrow 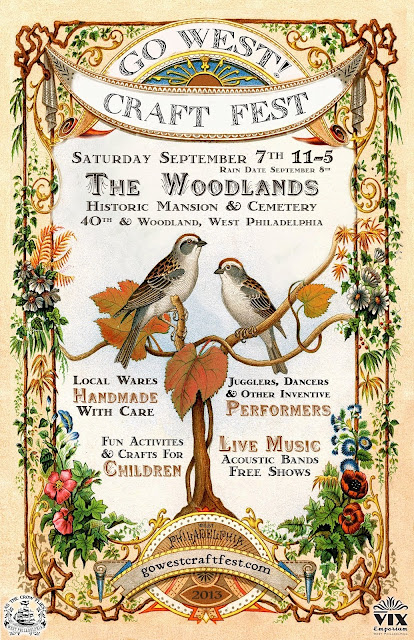 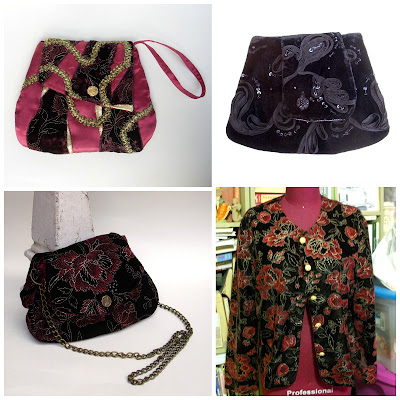 It's not that I'm not sewing, but I've been on a roll with the shop lately, so that's what there is to show off.

The holidays are coming, after all, and more than a few craft shows.  So I'm filling up the Etsy shop and trying to make extra inventory for shows, and the upcycling bug has really hit lately.

Mario and I have been reading my favorite series of novels in the evenings, in lieu of watching TV (or at least as much TV).  It's his first reading, and my third (?) or possibly fourth, depending on which book in the series we're talking about.  The books are the Lymond Chronicles, by Dorothy Dunnett, and they're set all over Renaissance Europe.  It's my favorite kind of reading - long, involved, historically accurate and ridiculously swashbuckling.  Romance and sex, too, but these are historical, not hysterical (those have their purpose, too; I can't say I've never read a hysterical romance novel in my day).

I think I've had so much of it in my head lately that it's started leaking out through my fingertips in the sewing room, because this group of bags I just finished (most of them sourced from a floral velvet jacket donated by a friend) have something distinctly Renaissance in their makeup.

Inspiration: it comes from a lot of places, and when it shows up, you try to listen to it. 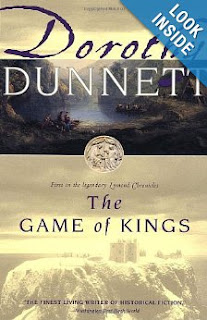 Have you ever had an unusual source for your inspiration to create something?  I'm working on a series of bags right now inspired by my favorite series of novels, the Lymond Chronicles, by Dorothy Dunnett. Mario and I are reading them aloud in the evenings, a welcome break from TV, and although I've read them before (some of them multiple times), I'm still getting something new from the stories.

Set in Renaissance-era Europe, literally all over Europe, the stories are swashbuckling high adventure, romance, intrigue and much more.  Picture a cross between James Bond and Errol Flynn, with sword fights and scheming villains and all sorts of costumed fun. With detailed plots and dozens of characters, not to mention quotes in every language, they're not an easy read, but that's one more thing I like - I'm a fast reader, so I really appreciate a story that makes me slow down and savor. 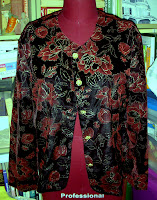 All that being said (and hopefully I've sent some of you off to Amazon to look at the book descriptions in more detail), I've had a head full of Renaissance colors and design for the past few weeks, and it's apparently starting to leak out.

To top it off, a friend gave me a bag of clothes recently.  She pulled out one piece and said apologetically, "It's not old, but I thought it was pretty."  "It" was a black velvet flowered jacket with gold buttons, and "it" is well on its way to making history as several bags inspired by my favorite books.  Combined with black and dark red satin, some scraps of gold fabric, a load of vintage trim and some buttons, that not-so-little jacket will end up being at least four bags.