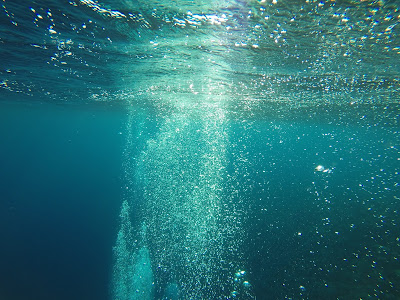 Now that I - and most of the people I know - have been vaccinated, it's time to start thinking about getting back to normal. A new normal, I think, because there were things wrong with the old normal, and if this has not been a chance for a reset, then we've learned nothing.
I've actually enjoyed the lack of peopling during the pandemic, but that doesn't mean I can avoid them indefinitely. Nor do I want to.
An local acquaintance recently sent out an invite for a party on Friday night. She asked her guests to provide proof of vaccination, so we would be comfortable being around each other, but we could certainly still mask up if that made us more comfortable. She noted that the party would be held both indoors and outdoors, so we could pick the zone where, again, we felt the most comfortable.
When I accepted the invitation and sent my proof of vaccine, I was excited about going. As the day grew closer, it began to feel more like work than pleasure, and by the time I left the house - I still went, despite having reached a level of existential dread usually only provoked by large family gatherings - it was just as likely I would run for the hills as walk the five blocks to her house.
I met up with a friend on my way there, and within a block, we ran into two more women, each walking with a dish, or a bakery box, all of us radiating twitchiness and nerves and a general aura of not having left our house for a year plus.
Thankfully, when we got there, there was a full bar, because there were also at least 60 women spread out over the front porch, living room, dining room, kitchen and back deck. I haven't been around this many people in 16 months, and I admit it was really, really unnerving at first.
I wasn't alone in that feeling. There were lots of jokes about not remembering how to behave in public, and reaching up to remove non-existent masks before eating or drinking. It made us all feel a little better, knowing we were in the same unfamiliar boat.
The plan was only to stay for an hour, but I ended up staying for nearly three. The second glass of box rosé really helped, but it was also talking to a lot of women who had been through similar things and were feeling the same conflicted feelings about getting back to normal.
Anyway, I've done it. I've gone to a party, without a mask, talked to a whole bunch of people, and lived to tell the tale. Now that I think about it, it always has been my MO - if I'm scared of something, the best thing I can do is plunge in and think about it afterwards.
What about you? Have you been out and about yet? Does it feel weird? Normal? What is normal, anyway?
Posted by Karen at 1:35 PM No comments: 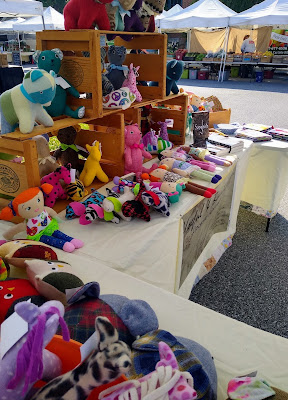 It was 90+ degrees by the time we packed up to go home last Saturday. But before that, it had been 4 hours of near normal - talking to people, selling, listening to music outdoors in the sun, and petting dogs. Lots of dogs.
It felt way more normal than I expected. Being that the sum total of my conversations for the last year have been with my husband and a few neighbors, I wasn't sure how I would be able to handle the general public, but it was great. We were all a bit dazed, like we've just been let out of cages, and we were all a little more gentle with each other than would normally be the case. Which is good, and I hope is one of the things we've learned in the pandemic that sticks.
The big hits of the day were my toddler dresses - I sold seven of them - and my recycled fabric dolls.
Being that it was Swarthmore, a liberal college town, the Pride dolls in their rainbow dresses went over particularly well. I also had a small stack of my books with me, in the hopes of selling a few. No luck there, but there were a few interesting conversations with people, and I gave out a lot of bookmarks, so hopefully this will lead to future sales.
I don't have another show booked for some time, though I am considering doing a 4th of July flea market in the next town over. My stuff doesn't class as flea market, but the organizer said there are so many artists out of work that they've expanded their admission criteria. And it's only a few miles from my house, so hard to turn down.
Now back to writing. I have edits due on the third Tudor book by June 15, and a self-imposed deadline to get at least another 10 chapters of my Great Depression story edited by then. I'm also still working on the audiobook of a wider world, but right now I'm in a waiting phase because my voice artist has a bad case of pollen and I haven't gotten anything new from him in about 10 days.
So that's where I am. What about you? Have you done something normal yet? How did it make you feel?
Posted by Karen at 4:19 PM No comments: 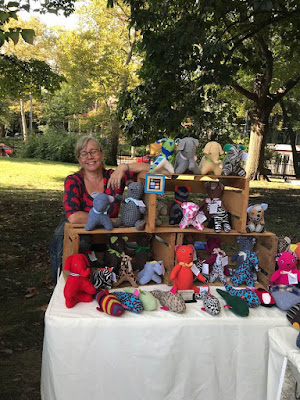 Once upon a time, I did a lot of craft shows. A lot. During the season - early April through end of June, and then again from Labor Day through Christmas - I would be out every weekend, sometimes both days. For the holidays, Friday-Saturday-Sunday.

Then came Covid. My last craft show, excepting the informal one I set up on my front patio last Thanksgiving weekend, was the week before Christmas, 2019. It would have been later, but I picked up something viral and unpleasant before Thanksgiving that flattened me until mid-January, and by that last week, I couldn't do any more.

So it's been a long time. And I haven't totally missed it, as it turns out. The pandemic made a lot of people rethink their normal, and I made a few decisions regarding my handmade business - which aren't because of wanting to build my writing business, but simply because it feels time.

I'm only going to do local shows now, here in town or in several suburbs nearby. They're not only the most convenient (necessary since I don't drive and I hate asking Mario to spend a day ferrying me back and forth; it eats into the profits, as well), but shows here and in Swarthmore, particularly, have always been the most profitable. I'm going to try to rework things to build a more sustainable online presence on Etsy, since right now the handmade shop is only busy at the holidays.

My first event is this Saturday, June 5, where I'll be the featured artist at the Swarthmore farmer's market. It's a short event - only 9 a.m. to noon - so I can ease back into packing the car, setting up/breaking down and, most importantly, remembering how to people. Social re-entry is going to be a little rocky for this introvert, but I'm sure I'll figure it out.